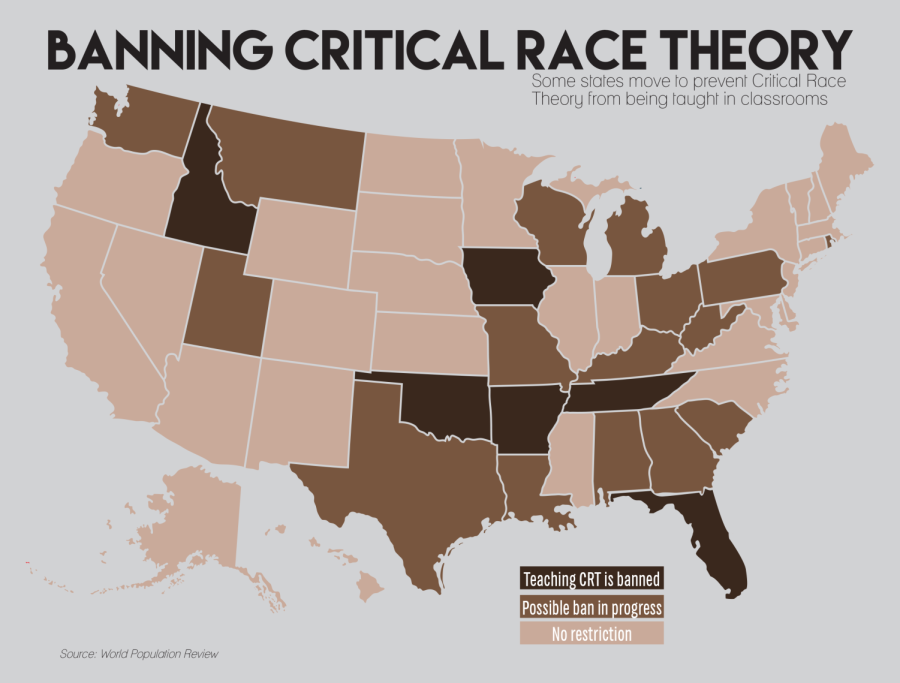 Many states are now in the process of banning or have already banned the teaching of Critical Race Theory in schools.

What is Critical Race Theory?

Officially coined and created in 1989 at the first Critical Race Theory Workshop in Madison, Wisconsin, Critical Race Theory was born after a group of more than 20 scholars worked to identify shifting and more subtle enactments of racism in America. Some of the scholars who played a role in the creation of Critical Race Theory include Kimberlé Crenshaw, Angela Harris, Charles Lawrence, Mari Matsuda and Patricia Williams. The theory was then taught in law schools to better explore the idea of intersection between race and law. Law professor Alan Freeman is credited with writing many foundational articles outlining Critical Race Theory.
Critical Race Theory has six foundational beliefs, commonly referred to as tenets. The first tenet explains that race is a “norm” in the U.S. for most people of color. While the U.S. has experienced an evolution in the rights of minorities, Critical Race Theory holds the belief that most people still continue to face racism and discrimination in various areas of their life.
The second tenet is known as “interest convergence.” Interest convergence is the idea that any advances made for people of color appear to birth change, but the changes that are made must satisfy the needs of the dominant white population. In simpler terms, Critical Race Theory argues that minorities gain support from white people only when white people will benefit.
The third tenet argues that race is not a biological occurrence but is instead socially constructed. This position on race has been supported by many scientific scholars since the late 20th century. Some critical race theorists hold the belief that race is a false correlation between physical and behavioral characteristics. The commonly accepted constructs of race have, in turn, led to years and years of generational feelings of superiority and inferiority.
The fourth tenet expresses the idea that minorities experience “differential racialization.” This concept states that stereotypes of minorities shift over time. Different for each minority group, these stereotypes are commonly seen in pop culture and vary based on current events. For example, when U.S. immigration issues experience an increase in attention, the adverse reaction is a rise in anti-Hispanic rhetoric.
The fifth tenet echoes the belief that a person can not be identified with one single group. A person may identify as a female but may also have a sexual, political or religious identity. Put simply, this tenet expresses that minorities have overlapping and intersecting identities.
The final tenet of Critical Race Theory explains that being a minority, grants a “presumed competence” to discuss race and racism. By having a presumed confidence, marginalized people can account for their ideas as well as introduce others to a different perspective.
The relation between Critical Race Theory and systemic racism also breeds a major question: what is systemic racism and how is it present in today’s society?
Systemic racism is a principle arguing that while racism is the outward or obvious oppression of someone because of race, systemic racism is instead described as a pervasive, yet subtle, obstacles at the core of major institutions or systems throughout American society, which disproportionately impacts minority groups, specifically racial minorities.