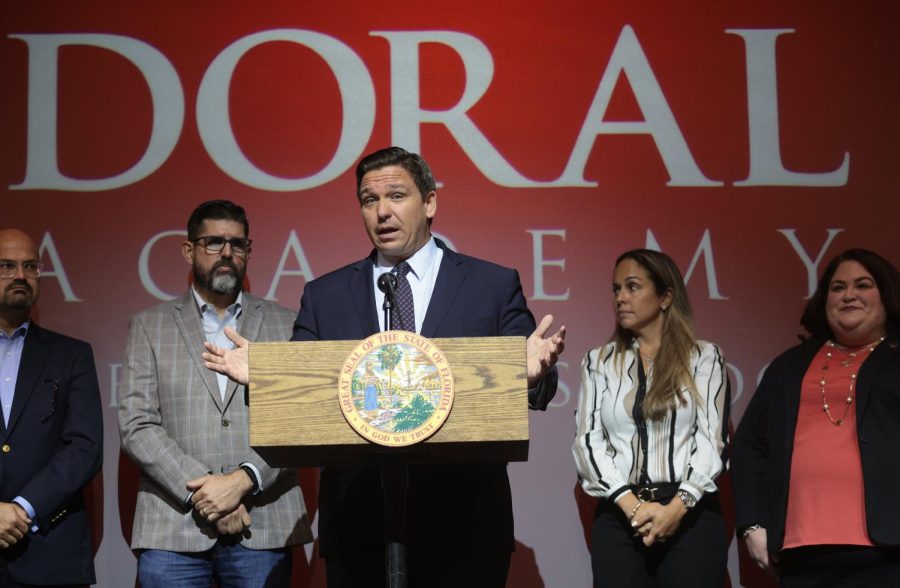 On Tuesday, September 14, 2021, Florida Gov. Ron DeSantis calls on lawmakers to revamp the state’s school accountability system by eliminating several of the annual exams, and replacing them with more regular progress monitoring that already occurs throughout the school year. Courtesy of Carl Juste/TNS.

Since 2015, Florida students have taken the Florida Standard Assessment (FSA) to measure their academic progression. However, as of next school year, the test has been replaced. On March 15, Florida Gov. Ron DeSantis signed Senate Bill 1048, taking away the FSA; instead, students will take “progress-monitoring exams” that test students’ abilities three times a year.The law requires students to take the progress exams at the beginning, middle and end of the school year. The exams that will be taken at the beginning and middle of the year will be used to set benchmarks, while the test that will be taken at the end of the year will be a final exam used for accountability. Students will be given progress exams in English/Language Arts in grades 3 to 10. Exams will also be given in math from grades 3 to 8.

Supporters of the implementation of the new, different testing say it gets rid of standardized testing and introduces a new way of collecting information that is needed. These progress-monitoring exams are supposed to give teachers the ability to assess students throughout the year, enabling them to change lesson plans, address problems accordingly and provide remedial education when necessary.

The concept of standardized testing has been a controversial topic in the United States school systems. Many believe it is a good change to the system; some individuals believe that standardized testing only determines whether students are good test-takers, rather than if they comprehend the subject material, sometimes also accusing the tests of being racist, sexist and classist.

Some individuals are also against this new bill because it puts more work on students and teachers as students will now have to take three exams rather than one, with the last one being similar to the current FSA. Teachers will also have less time to assess students, being forced to take out more time from their teaching schedule to test students.

I do not support this bill, especially as a parent. Testing […] will be online. My child enjoys the ability to be creative and explore, which also demonstrates understanding of concepts. Online testing is just one way to prove mastery. The constant testing takes away the opportunity for creative thought and free-thinking.”

The high stakes will still remain as part of the new FAST testing. Results will still be used for grade 3 promotion and to determine if students meet the minimum score to graduate from high school.

The Florida Education Union released information about the switch from FSA to FAST, emphasizing that “the law does not reduce testing, nor does it eliminate the big end of year test.” The FEA’s stance is that DeSantis did not fulfill his promise to reduce testing and passed a bill that will now affect teachers and students even more than before.

“I feel that this bill will affect the Florida school system as a whole,” freshman Jiya Anand said. “Tenth grade FSA scores are checked by colleges, what will happen when incoming tenth graders will not be taking it next year?”

Getting rid of the FSA has led to the introduction of new methods of testing throughout the state, exciting some individuals and letting many others down.