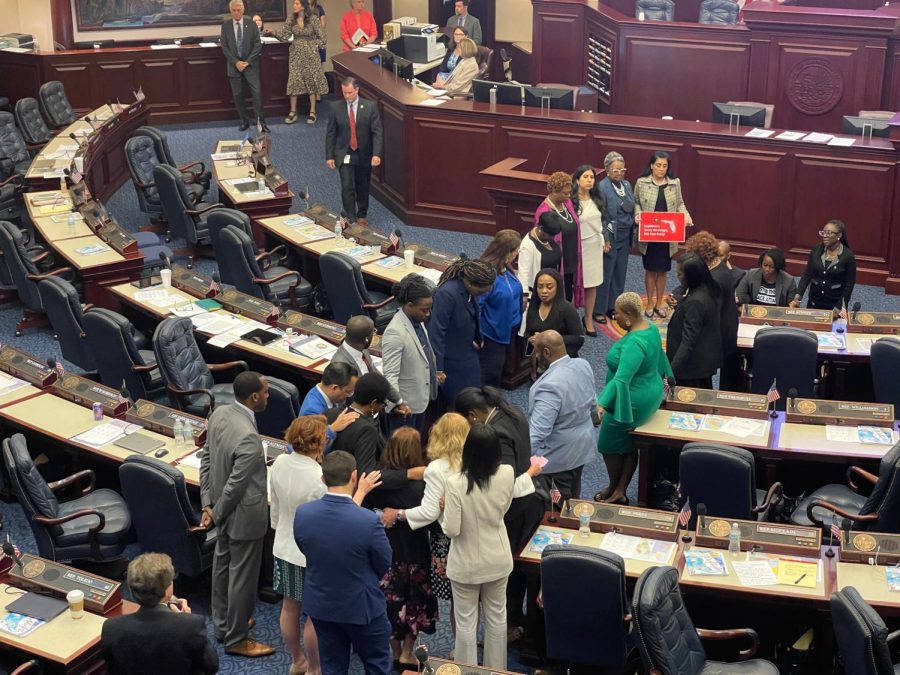 Florida House Democrats protest against the congressional map proposed by Gov. Ron DeSantis and approved by the Florida Senate. The protest in the Florida House chamber prompted a recess in the consideration of the bill by the House on Thursday, April 21, 2022, in Tallahassee, Florida. Courtesy of Ana Ceballos/Miami Herald/TNS.

The congressional maps of Florida play a significant role in determining which political parties will ultimately hold power in the US House of Representatives. As a result of the population growth shown in the 2020 Census, Florida gained an additional congressional seat, totaling 28 districts. It is now the duty of the state government to redraw the state’s boundaries to include the new district.

After vetoing a previously approved map by the legislature, claiming that districts in Northern Florida were not “race-neutral,” Republican Florida Gov. Ron DeSantis called for a special session to redraw congressional boundaries. This task is typically the job of lawmakers, but the power was ceded to DeSantis to end the continuous disagreements between legislators and the governor.

In a news conference in April, DeSantis addressed the issue of his redistricting maps.

“We are not going to have a 20-mile gerrymander that divides up people based on the color of their skin. That is wrong. That is not the way we have governed in the state of Florida,” DeSantis said.

The ‘gerrymander’ that DeSantis referred to are districts that have enacted protections over minority voters in Florida’s northern districts. Gerrymandering is a process in which boundaries of an electoral district are manipulated to favor a specific party or class of people.

According to Pew Research, Black voters are more likely to be Democrats than are white voters, so eliminating these districts could potentially give Republicans a 20-8 seat advantage in the U.S. House of Representatives, even though registered Republican and Democrat voters are nearly equal in number as there are currently 5,145,983 Republicans and 5,034,448 Democrats.

“I think that Gov. DeSantis is doing something to promote his own political agenda that also reduces Black representation in Congress,” sophomore Kennedy Browne said. “The map seems more like an attempt to suppress the voices of Black voters.”

In the instance of Florida’s 5th district, ranging from Tallahassee and Jacksonville, which contains Black communities, DeSantis has asserted that he would redraw the lines to make it racially neutral. His map would split Jacksonville, a city known for containing a large population of Black Floridians in the state, into two Republican-leaning districts.

“For the house speaker and senate president to cave in and be derelict in their constitutional responsibility sends a bad message – that they are not capable of doing their job,” Al Lawson, the current Black Democratic representative of Florida’s 5th district said in an interview with the Tallahassee Democrat.

The proposed map would likely eliminate his seat due to the lines drawn that push for more conservative voters within his district.

In response to the passing of DeSantis’s map, voting rights groups, such as Common Cause Florida have filed a lawsuit arguing that the proposed map is in violation of Florida’s Fair District Amendment. This amendment aims to protect minority representation in Florida during the redistricting process. Their mission statement states that they are working to make sure Florida’s 2022 district lines are drawn “to benefit the people and not the politicians.”

The resulting ruling on May 12 by Leon County Judge Layne Smith struck down the map citing that the redistricted map was in violation of the state constitution because it diminished Back voting power in Northern Florida.

Following Smith’s ruling, which included implementing a replacement map, an appeals court reinstated the congressional map approved by DeSantis again. With a decision supported by four Justices, three of which were appointed by DeSantis, the Supreme Court of Florida declined the case, saying it did not fall within their jurisdiction.

The potential implications of the redistricting map would greatly affect Black voters in Northern Florida. Should the Fair District Amendment of the Florida Constitution be dismantled by the Florida Supreme Court, the outcome will affect future redistricting and the voting districts of current and future Florida voters.