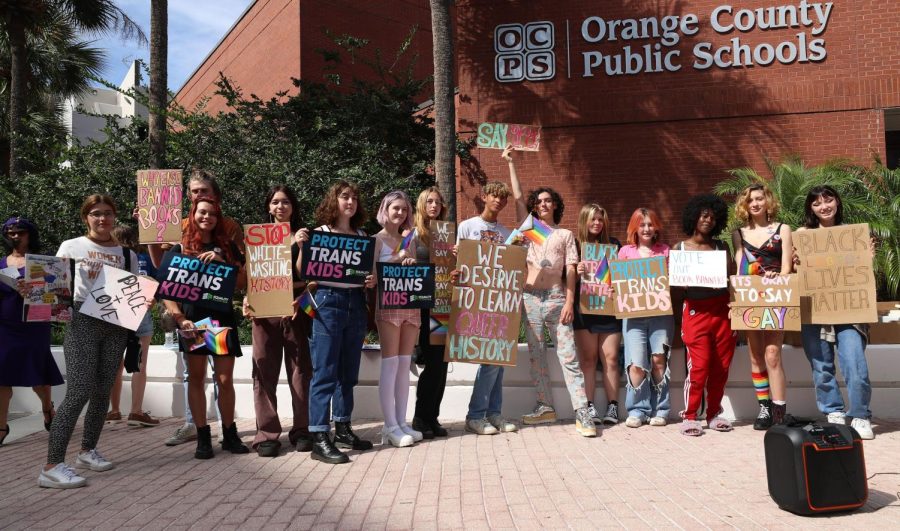 Students hold a rally outside a Orange County School Board meeting, on Tuesday, May 24, 2022. A student group based at Winter Park High and a local group opposed to book bans are holding a rally outside the Orange County School Board office. They are rallying against state laws. Courtesy of Ricardo Ramirez Buxeda/Orlando Sentinel/Tribune News Service.

In addition to the variety of education bills passed in the 2022 legislative session, House Bill 1467 outlines a new set of policies and procedures for school board members in regards to term limits and curriculum transparency. This bill was signed into law on Friday, March 25 by Florida Gov. Ron DeSantis and will go into effect on July 1, 2022.

While the state of Florida previously did not have term limits for school board members, HB 1467 restricts the permitted number of terms per board member to three, with each term lasting four years. This new policy will take effect on Nov. 8, 2022, for all elected board members. For those currently serving on a school board, their current tenure will not count towards their total 12 years, allowing them to start serving their official 12-year term.

“I think that 12 years is a lot of time, and as a school board member if I am not able to accomplish what I set out to accomplish, then that is kind of a problem. I also think that as someone who ran against an incumbent, it is very hard to unseat an incumbent when it comes to local elections where those decisions are made in an August primary where not a lot of people are even voting,” Sarah Leonardi, school board member for Broward County Public Schools District 3, said. “If you want to see new blood on commissions or boards and you want more young people to get involved and you are not independently wealthy, I think term limits are one way to accomplish that.”

In the past, many have expressed concerns surrounding the constitutionality of school board member term limits. Currently, the Florida Constitution outlines that a school board member’s term shall last for four years, but a limit on the number of terms said member is permitted to serve is not included. Due to the lack of current term limits, many have argued that Florida voters should have to vote on whether or not they would like to add this rule to the Florida Constitution.

“I definitely think that school board members should have term limits because change is happening daily and having the same people on a committee, which affects millions of students, will not always bring in the best outcome for our schools,” junior Noldine Belizaire said.

While Leonardi also advocates for school board member term limits, her concerns lie with the initial intention of the bill, rather than the impact itself.

I will say that the original theme of that bill was to eliminate salaries for school board members, so I generally don’t agree with the approach of [House Bill 1467], and I know that the bill was intended to punish school board members for a lot of the push back that we had against some of the public health policies coming from the governor and legislature this year. The nature of this bill was punitive, and I don’t think that any legislation or policy should be done to punish certain groups of people.”

In addition to establishing term limits, HB 1467 also allows for greater parent involvement in the selection of material purchased for schools. On their website, schools will be required to publish the book selection criteria they utilize. All materials will also be subject to public preview before they can be approved by the school. School boards must also create and put into place a policy that allows for parents or county residents to object to the subject material.

“Governor DeSantis has shown time and time again that he is not afraid to fight for the rights of parents and understands the importance that they have a seat at the table when it comes to their child’s education,” Florida Commissioner of Education Richard Corcoran said on March 25 in a news release from the Governor’s office. “I’m grateful for the Governor’s guidance and the voices of many parents, who have come forward and demand that parents be seen as a partner in their child’s education.”

This process includes a formal petition that must be filed and posted online by the parent or resident who is objecting within 30 days of the adoption of the instructional material. The form must include the objections to the materials and the contact information and signature of the person filing the petition.

At the conclusion of the 30-day period after implementation of instructional material, school boards will be required to hold at least one public hearing. In addition to the hearings, an unbiased hearing officer, who cannot be a school board employee or school agent, must also be present. After conducting a hearing, the school board’s decision is final and can not be reviewed again.

“I generally think that this approach from the legislature and the Governor in terms of parental rights is not at all about parental rights. I think that this really distracts from the day-to-day business of what a school board should be doing, which is making sure that our district is providing a high quality of education to students,” Leonardi said. “I think it really undermines the professionalism of the educators in this district. People went to college, got multiple degrees to be able to be experts in their field and the governor and the legislature are insisting on attacking those people. That provision in the bill was detrimental to what we’re trying to do, which is educating students.

HB 1467 also includes the creation of school library media services. Beginning Jan. 2, 2023, all school librarians, media specialists and others involved in the library materials will be required to complete a training program, which will work to ensure that appropriate materials and resources are being selected for students.

“I feel like [the law] is unnecessary; I have been doing this [job] for 24 years and I know that I am supposed to be taking care of this community, MSD,” Media Specialist Diana Haneski said. “I always want parental input but I don’t understand why the [Florida] government needs to say that. Of course, we care about what a parent thinks because it’s their child. A parent and a child can have a conversation about whatever topic a parent is concerned that their student or child is asking about. For me, I am working with young adults, if you don’t want to read that scary book you don’t have to read that scary book, you can make that decision. But somebody else [may] want to read that scary book and we should let them. There are places where they don’t have enough to eat or enough to read, let’s focus on that.”

Along with a new training process, school boards must also have a process for developing library media center collections to be published on each school’s website. Each district’s process for developing library media center collections should also include a section on “regular removal or discontinuance of books” due to the relevance of a book or how the book aligns with state academic standards. Lastly, this bill requires that all instructional materials are searchable on school websites.

Critics of this law fear that new parental input will result in a wave of removal of books discussing topics considered controversial, like racism and sexism in America and representation of the LGBTQ+ community.

“As of now, the laws that DeSantis has passed so far about school systems [have] only been restrictive and has silenced many minority communities. His continued discrimination against marginalized groups will only have a negative effect on the school system as we go on,” sophomore Cassidy Tarr said. “This law will decrease discussions by discouraging queer youth from exploring their identities and talking about it in a safe and healthy environment. It will lead to more suppression of identity and self-hatred in a lot of these communities due to it being looked down upon as a taboo subject. Although I feel that this will have an effect on the availability of knowledge on certain topics of discrimination, public schools as of now still don’t have very many sources in school libraries and other forms of information on LGBTQ+ topics in the current system under our laws right now.”

This is speculated due to the vast complaints made by parents in the past in high schools across Florida. For instance, in Polk County, 16 library books were removed from all school libraries after parental complaints. One of the books was “I am Jazz,” an autobiography of a young transgender girl who lives in South Florida. Other books which explore the sexuality and gender identification of young adults have had attempted bans in Florida as well.

In Hillsborough County, the book “The Bluest Eyes,” detailing the life of a young Black girl that grew up during the time after the Great Depression, was pulled from shelves as parents felt the book was too explicit; the book contains intense scenes depicting racial aggression.

Many feel this piece of legislation will suppress the voices of minority communities and limit the exposure students have to those topics.

“I’ve been building the MSD collection for seven years so that a student sees themself and sees others. It could cause those who just became a media specialist, or one who has been one as long as me, make them afraid to lose their job if they have something that one person is offended at and wants to ban,” Haneski said. “We have a very supportive principal. We have a very supportive director over libraries, and [they] are very supportive of having what you need, but other schools are not as lucky.”

Many in favor argue that the new provisions in HB 1467 allow for increased parent involvement in the education of their children, while critics feel that the bill distracts from the previous job of school board members and suppresses diversity in the curriculum. For school board member limits, its effects can vary, but some feel this is important to keep the school board changing.