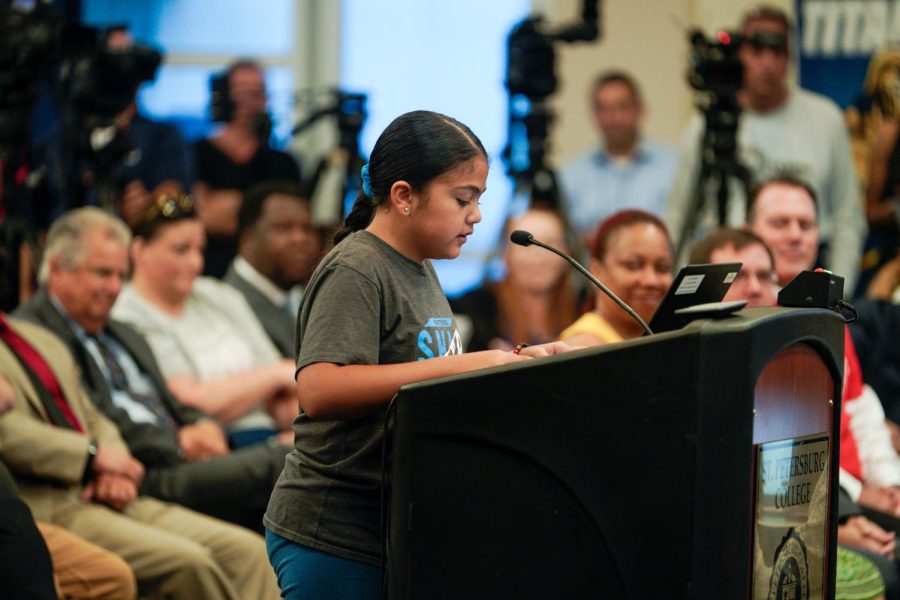 Zoe Sanchez, 9, a student at SouthShore Charter Academy School, makes remarks on behalf of her school during a meeting Wednesday of Florida’s State Board of Education, held at St. Petersburg College Seminole Campus. “I cannot say enough how much I love my school,” she told board members. Courtesy of Martha Asencio-Rhine/TNS.

Newly passed through the Florida Legislature, SB 892 will make major modifications to charter school authority in the state of Florida. Previously, Broward County Public Schools had the authorization to approve the building of charter schools within the county as well as the authorization to shut them down; with the addition of SB 892, the state will be fully responsible for that authorization and will be responsible for approving the establishment and closing of charter schools. This bill was first introduced on March 3, 2022. It passed in the Senate with a 24-13 vote and passed in the House with a 105-10 vote.

“I, just as one board member and then as a teacher who believes in public education, I am generally opposed to the idea that local school districts have less oversight over charter schools because they directly impact the schools around us,” Sarah Leonardi, school board member for Broward County Public Schools District 3, said. “Before the legislation passed we still didn’t have a ton of power to prevent them from opening [in the] first place because a lot of times they would just appeal at the state level.”

Effective on July 1, 2022, the bill also states in order to be created, charter schools must be approved by the sponsor, which is the governing board of the charter. After this, the board will follow a public hearing according to the Florida Senate description. Changes in the curriculum taught at the proposed charter school will now be approved by the state as well. These curriculum modifications must stay consistent with state standards and will stay approved unless the Department of Education finds that they are inconsistent with the standards.

I am a huge believer in local control, so I really believe that the people who are closest to the communities like local elected officials are a must in making decisions that reflect their communities’ values. Broward County is very different from countries up in the northern part of the state, so I believe that local school boards representing the communities should have more of a say, not the state.”

In addition to retaining the sole authority to close down charter schools as well as approve their creation, the state will also be in charge of determining the renewal of contracts, effectively cutting the districts out of the process entirely.

“I think that [the state] under its current leadership has a plan to systematically dismantle public education in the state,” Leonardi said. “I understand the rationale behind charter schools, but how we have seen them play out in this state with a lack of oversight regulation has really been detrimental to our public schools.”

About 60 days after the request for renewal, the state must consider all factors before choosing to approve or deny the request. If the request is denied, the sponsor will notify the charter school’s governing board within 10 days of the decision and must provide specific detail as to why it was denied.

The school, once renewal has been requested, will have a hearing conducted by the Division of Administrative Hearings. It must be conducted within the aforementioned 90 days with the judge’s final order being submitted to the sponsor shortly after.