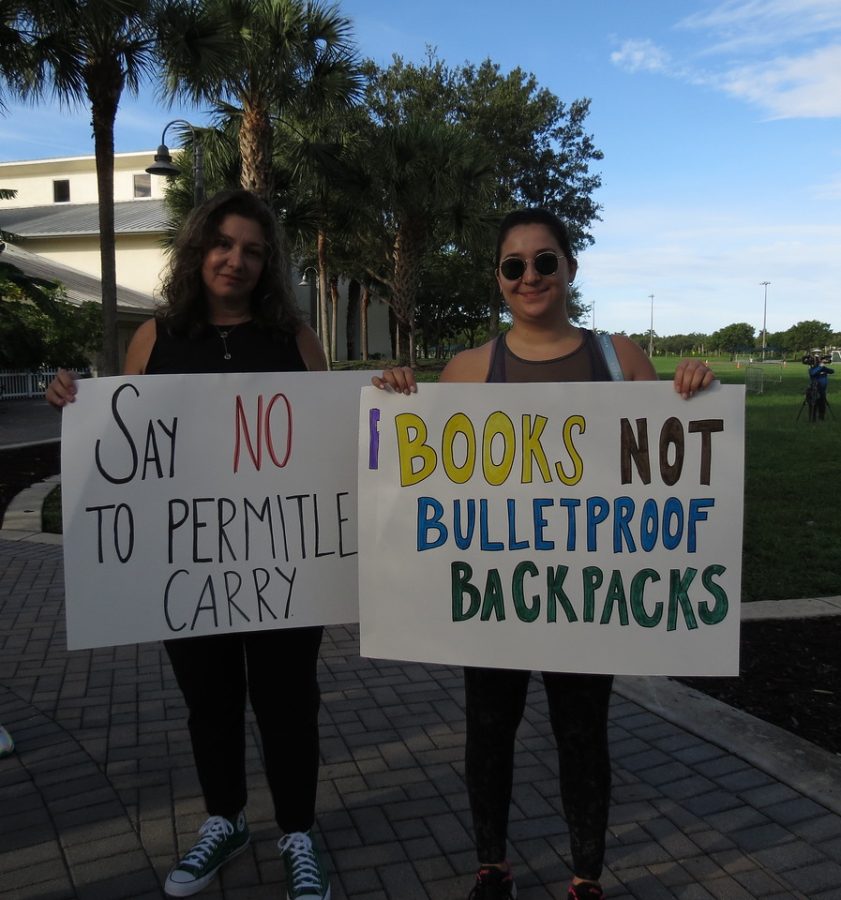 Candidate for U.S. Congress Hava Holzhauer and a fellow protestor hold up signs advocating for gun control. Their signs read “Say NO to permitless carry” and “Books Not Bulletproof Backpacks.”

Sunlight lights up the shadows of activists gathered around a stage. Mothers, fathers and children united together to fight for the same cause: gun reform. Affected by various personal experiences, these individuals hold up decorated signs and shout out empowering phrases.

On Saturday, June 11, rallies were scheduled in more than 400 cities nationwide. Organized by March for Our Lives, a student-led movement centered around gun violence prevention, the event drew in thousands of participants. The demonstration emerged barely three weeks after the Uvalde shooting in Texas that took the lives of 19 elementary school students and two teachers.

“I can’t believe that Uvalde, Texas has now occurred. It’s unbelievable that we’re still in the same situation that we were all those years ago. Columbine 20 years ago. Something’s got to change,” Parkland resident and mother Marlene Pagal said. “I think there are a lot of thoughts and prayers, but not a lot of action.”

One of the many rallies took place in Parkland, Florida, the site of a mass shooting at Marjory Stoneman Douglas High School four years ago. Approximately 3,000 individuals marched together to address gun violence and reform.

“Although I’ve been somewhat active, I actually feel that people like me haven’t done enough to lead things to change, particularly with respect to the shootings in schools,” Parkland resident Jim Fenoglio said. “I think that the adults in the room have let society down by continuing to put our kids at risk, so that’s why I’m here.”

In light of the recent increase in shootings, the public continues to adamantly push lawmakers in Congress to make decisions in regard to gun control. At the rallies themselves, several guest speakers talked about their personal experiences with gun violence and how it affected the rest of their lives.

“I think that the fact that we’re having a lot of different voices who have experienced gun violence in a way that maybe our community hasn’t, whether it be inner-city violence or domestic violence, I think that will make people realize just how pervasive it is. Hopefully, the national media coverage will get people to listen to us one more time,” President of March for Our Lives Parkland Zoe Weissman said.

Speakers included Debra Hixon, who lost her husband Chris Hixon in the Parkland shooting, the Circle of Brotherhood, who spoke about the normalization of gun violence in their communities, and Sari Kaufman, who survived the Parkland shooting and helped organize the recent March for Our Lives event in Parkland.

Other dominant topics included voting power and speaking out. A common phrase shouted throughout the event was “Vote them out,” referring to the senators and representatives who have done little to nothing to resolve the gun violence issue America faces.

“How do you do nothing? How do you not respond to a disaster when kids and babies are slaughtered in school? How was the response? Nothing,” Broward County Commissioner Jared Moskowitz said. “If [Texas] passed the Florida law, [what happened in Uvalde] wouldn’t be happening in Texas. They made it too easy to get guns in Texas.”

While Florida has made improvements, such as raising the age to purchase a gun to 21 years old and implementing red flag laws, few states have followed in their footsteps.

“The most important thing about this is that when everyone comes together, it sends a really important message to our U.S. senators that this is an issue. We’re going to keep fighting until you actually take action to make us safe. That’s what this is about,” Congressman Ted Deutch said.

In the months leading up to the primary and general elections in the fall, more individuals will likely register to vote. The objective of March for Our Lives is in the hands of the people, especially an emerging generation of young activists. In 2018, voter turnout among 18-to-29-year-olds jumped 16% from 2014, according to the United States Census Bureau.