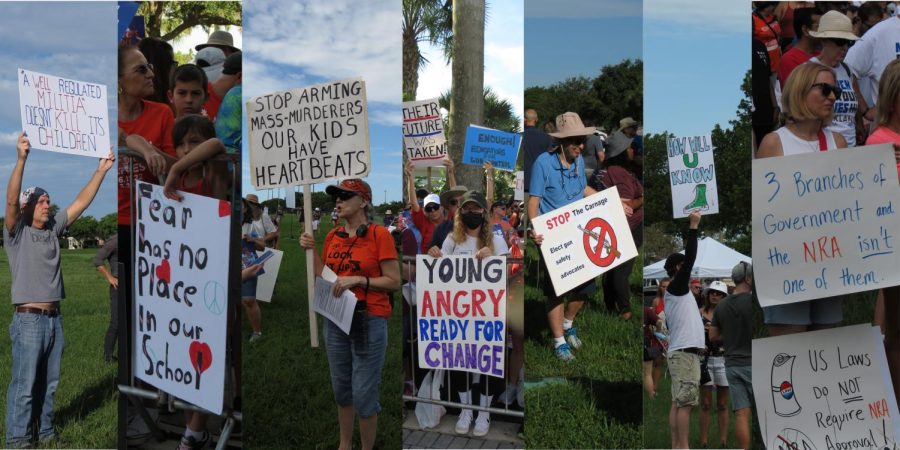 At the March for Our Lives event on Saturday, hundreds of protesters held signs illustrating their feelings on gun violence and reform in our country.

Marchers hold signs to convey their frustration, fear and views on the current status of gun control in the U.S.

Protestors have relied on using signs to display their thoughts to the public on various topics since rallies were first broadcasted on televisions or photographed in the 1960s. Rallies for voting rights, civil rights, women’s rights, political campaigns and more have now transformed into a sea of signs and while it is an effective method, the deep meaning of some of these signs can get drowned out by the loud, crowded protest.

Four years after the first March for Our Lives dedicated to the victims of the shooting at Marjory Stoneman Douglas High School and gun violence victims across the country, the community gathered again to protest the lack of political change since that event. Out of the crowd of about 3,000 marchers, there were hundreds of signs. Below is a breakdown of a select few that illustrate important topics surrounding gun safety and ones that have personal meanings to the protestor.

The term ‘mansplain’ is a popular one with today’s youth, defined as “when a man explains something to a woman in a patronizing tone as if the woman is too emotional and illogical to understand,” according to the Urban Dictionary. The desensitization of gun violence in America and the way in which pro-gun male representatives discuss it can make those, like the protestor shown, feel it removes the bottom line that gun violence is killing children.

Even deeper, this term correlates even more to gun violence in its relation to toxic masculinity. Toxic masculinity is the social science term that describes the harmful traits society associates with what makes a man ‘masculine’ that can lead men to be sexually aggressive to seem dominant or become violent after unreleased emotions; traits like showing no emotion, being the alpha, strong, etc.

This violence can turn to gun violence; in a nutshell men, especially those in their late teens/early twenties, buy large guns to seem more masculine and with their repressed emotions, they can act out. According to a study by the Violence Project, men are responsible for 98% of mass shootings.

Men are also responsible for 80% to 90% of all homicides in the country; which brings a further link to domestic gun violence. According to the Educational Fund To Stop Gun Violence’s report on Domestic Violence and Firearms nearly half of all women murdered in the United States are killed by a current or former intimate partner, and more than half of these intimate partner homicides are by firearm.

According to the Center for Disease Control and Prevention, the number one cause of mortality in children ages 1-19 is firearm related injuries after a 13.5% increase in recent years that now surpasses motor vehicle crashes. Even with this increase, gun reform laws and regulations have not increased in a rate anywhere near that.

“Columbine happened when I was in eighth grade, and since then we have had more than three hundred school shootings and it’s just like at what point is it going to be enough to make people stop and understand that our kids deserve better? That they deserve a childhood and they don’t deserve lockdowns all the time and [to] be afraid of what’s going to happen,” marcher and teacher at Cooper City High School Fallan Patterson said. “Parents don’t deserve to be scared to send their kids to school. My son is going into eighth grade now一it’s a weird bookend in my life.”

The pushback on gun reform has come from the Republican majority in the Senate that stops any meaningful gun laws to be passed after they go through Congress. However, another major platform for Republicans is their “pro-life” stance regarding abortions.

After the leaked draft of the Supreme Court’s decision to overturn Roe v. Wade, the Supreme Court ruling that the federal government protects a woman’s right in America to have an abortion, many Republican senators and congressmen have continued to voice their “pro-life” beliefs that abortions are ‘wrong.’ The main claim against abortions is that it is killing the conceived baby in the uterus of the person housing the baby, giving it no chance at life.

And while the debate surrounding whether the baby is “alive” or conscious doesn’t have a clear true or false answer, many “pro-choice,” those who are for womens’ right to choose to have an abortion or not, and gun reform supporters feel that this stance is hypocritical. “Protect the already born,” refers to the common argument by gun control advocates that feel as if Republicans opposing abortions because they care about protecting the lives of unborn babies is hypocritical. They argue that while Republicans attempt to protect the lives of unborn children, they “neglect” to pass laws gun control supporters believe will protect their already-alive children that attend school and are threatened by guns. Believers in this argument often feel that the arguments lies in that “If they are so ‘pro-life’ for children, then why aren’t they protecting the ones who are already alive and suffering?”

“I can’t stand that [the government] won’t make laws to protect our children, they keep getting money from the NRA and gun lobbyists. They need to think more about the children than the money in their pockets,” marcher Richard Cassey said.

“Does anyone really need an assault rifle?”

Self-defense is usually one of the main arguments as to why “banning guns is bad.” And while it’s not a totally false claim, Harvard’s School of Public Health Injury Control Research Center finds “the claim of many millions of annual self-defense gun uses by American citizens is invalid.” Most often, guns are used as an intimidation tactic rather than to actually protect oneself.

The other main argument is that it’s an American right. But if guns are the number one killer of children in our nation and there have been over 250 mass shootings in 2022 alone, regulation of that right (to be clear, not total ban of all guns), to Americans in support of gun control, does not seem like a drastic ask.

“I became involved [in the fight for gun safety] sometime after Sandy Hook, because that personally affected me. I have grandchildren, and I would be devastated if that happened to one of them,” marcher Debra Davis said. “It is a tragedy, it is an unthinkable and preventable一that’s the big word here, these are preventable tragedies; we don’t have to have these things happen.”

Other signs had personal meanings to those directly affected by gun violence.

Sara Lowell is a mother of two; her daughter was a senior and her son was a freshman attending MSD when the shooting occurred. Her sign illustrates the text messages sent between her, her son and her daughter while he was in the 1200 building during the shooting hiding behind a metal chair and both of them fearing he would not make it out safely.

“We want to stay as active as we can spreading the message … and if we didn’t we would just become complacent and nothing would happen; this is how change happens,” Lowell said. “We are the only country in the world where it seems that the 50 senators are not listening to the entire country. An 18 year old can’t buy a beer but they can buy an assault rifle, so much in our country needs to change, we are all fed up and pissed.”

She attended the first March for Our Lives after the shooting and returned because of her anger towards the lack of change since the event and since the traumatic event her family and community had to endure.

Iris Espinoza is a mother of three, one of her daughters attending Westglades when the MSD shooting occurred. This is her first march, she is tired of fearing how safe her children are while attending school.

“I am sickened by what’s happening in our world一in our country一I have three kids that go to school every single day and everyday I send them to school I pray in my car that I see them again and that’s ridiculous,” Espinoza said.

Her sign reads “My daughter hid for four hours NEVER AGAIN,” as she was unable to message her daughter that day because she didn’t have her phone and her daughter had to hide in a closet with her English teacher. She is upset that anyone in our country of any age or mental state has the ability to buy a weapon of war, referring to the semi-automatic rifles that those like the Parkland shooter and others use in these school shootings like the one her family had to live through.