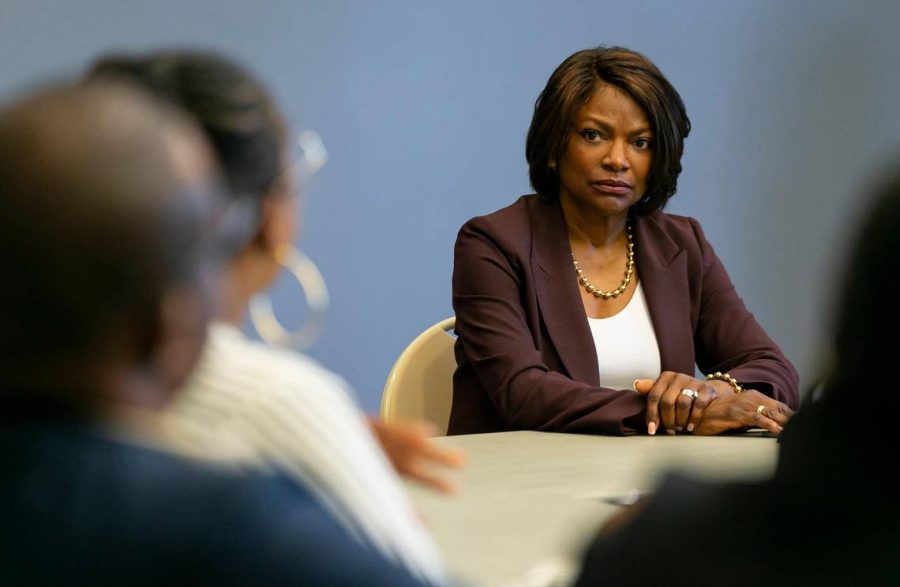 Republican Senator Marco Rubio’s seat is up for re-election in November. While Rubio’s primary was canceled and he will advance to the general election, several Democratic candidates are competing to secure their spot as the Democratic nominee.

Many candidates have similar views on important issues such as housing, the environment, the economy and healthcare. However, other important issues to voters this November include abortion, gun control, student debt, voting rights and the rights of parents.

Demings is the only candidate currently holding office and recent polls show her as the top choice in both the Democratic primaries and in the race against Rubio.

She started out as a social worker before becoming a police officer for 27 years. She was the first female police chief of Orlando, holding the position from 2007 to 2012. According to her campaign website, she reduced crime in Orlando by 40% during her time as police chief, and she was elected to the House of Representatives in 2016.

“Raised in a two-bedroom, A-frame home in Jacksonville, the youngest of seven children, Val Demings grew up knowing the value of a job and a dollar. Her parents, Elouise, a maid, and James, a janitor, did all they could to support their children and instill in them the meaning of hard work,” Demings’ campaign website said. “As a teenager, Val worked flipping burgers to help support her family. Now, as a Member of Congress, Val Demings works to ensure anyone willing to work hard can find a job that does more than just pay the bills — a job that can help build a better life for your children.”

On June 9, 2022, Demings introduced a plan with the New Democrat Coalition to fight inflation. In contrast, Rush believes the blame for inflation lies in the “overspen[ding]” of Congress.

Sanchez offers several solutions to major economic issues for Floridians such as housing, jobs and unions. His goals are to invest in public housing, broaden states’ abilities to create rent control standards and leverage federal funding to bring rent down by 10% with the American Housing and Economic Mobility Act.

Regarding jobs, he hopes to pass bills that would stop corporations from forcing employees to attend anti-union meetings, prevent employers from discriminating against the immigration status of their employees, let independent contractors unionize and penalize companies that violate labor laws. He supports a $15 federal minimum wage, something President Joe Biden already enacted for federal employees.

As Americans struggle to afford basic necessities, the $15 federal minimum wage is hailed by Democrats as a way to allow Americans to afford housing and food. Besides helping lessen the effects of inflation, many Democrats feel that cutting student debt will improve the financial situations of many Americans.

Demings supported “The Heroes Act” in 2020 that included $10,000 in federal student debt cancellation and referred to millennials in a June 2018 tweet as “among the poorest generations, saddled with nearly $1.5T in student debt and the lowest saving rate of workers.”

Sanchez wants to eventually make public universities tuition-free, though for those already with student debt, he adopted Sen. Elizabeth Warren’s plan to cancel up to $50,000 worth of federal student loan debt for 95% of borrowers.

“A multilingual second-generation immigrant, Ricardo de la Fuente was raised on the work ethic that made America great. […] In his work in green energy entrepreneurship, assisted living modernization, and small business advocacy, he has applied those skills for real change. As a philanthropist, he has raised hundreds of thousands of dollars for charities fighting against cancer, homelessness, and child poverty,” de la Fuente said on his campaign website. “With his wide and varied experience in bringing people together and supporting those in need, Ricardo is ready to fight for Florida’s future through the creation of meaningful well-paid jobs in green energy, infrastructure, and technology.”

Along with Sanchez, Rush also supports the transition to “green,” renewable energy instead of the United States’ “current over-reliance on carbon-based energy.”

The transition is a “hot-button issue” in recent years as people around the globe fear the consequences of climate change, which many experts say humans are already experiencing. They point to the record heat waves across the United Kingdom this summer and the rise in the number and severity of wildfires in California and Australia.

“Here in Florida, our environment is our greatest treasure and our most important economic engine. Florida’s natural beauty, beautiful beaches, and clean air and water fuel our tourism-based economy. Chief Val Demings takes threats to our environment seriously, because they are threats to Floridans’ jobs and ways of life,” Demings’ campaign website said. “That’s why she opposes offshore drilling off Florida’s coasts, and why she has delivered funding to combat the toxic algae that impacts our shores and waterways. Chief Demings knows the threat of climate change is real, and that’s why she supported the bipartisan infrastructure bill which will fund billions of dollars of climate change-resistant infrastructure in Florida and create thousands of new jobs.”

The bipartisan infrastructure bill was signed into law by Biden on Nov. 15, 2021, and would clean up Superfund and brownfield sites and cap orphaned oil and gas wells.

More recently, Biden signed the Inflation Reduction Act into law on Aug. 16, which included sweeping actions to reverse the effects of climate change. It passed after Sen. Joe Manchin reversed his opinion on the bill, paving the way for the bill to be passed in the Senate. Demings supported the act.

Sanchez supports another climate bill hailed by Democrats that has not garnered enough support to be passed: the Green New Deal, introduced by Rep. Alexandria Ocasio-Cortez in 2019. The Green New Deal calls on the federal government to dramatically reduce greenhouse gas emissions and establish that access to clean air, clean water and healthy food are human rights.

Additional climate priorities of Sanchez include joining Europe to create a carbon tax on the biggest emitters in the U.S. and strengthening the Environmental Protection Agency’s power to create regulations to keep Florida’s waters safe.

“We wouldn’t let our neighbors dump their garbage into our backyard, so why do we allow corporations to do the same?” Sanchez’s campaign website said.

However, Sanchez supports the plan, as well as expanding existing Medicare coverage to include hearing aids, vision and dental care. Others in the race propose less all-encompassing plans, such as lowering drug costs and affordable healthcare.

“Chief Demings believes that every American deserves access to high-quality, affordable health care. She knows that every day, too many Floridians are choosing between seeing the doctor or filling a prescription, and paying the utility bill or the rent,” Demings’ website said. “That’s why the Chief will fight to lower the cost of prescription drugs and stand up to the special interests who want to undermine protections for people with pre-existing conditions like diabetes or asthma.”

Reproductive healthcare, in wake of the reversal of Roe v. Wade, is one of the largest and most divisive issues on the ballot this November. Rubio remains firmly against abortion, but it is commonly supported by Democrats and by his opponents.

“Let me be clear: a woman should have the right to choose,” Demings said at a conference for abortion advocacy group Ruth’s List in Orlando on May 14.

She, as the only female candidate for Rubio’s seat, felt personally affected by the decision by the Supreme Court in June, as “a woman, a mother [and] a woman of faith.” She helped introduce the Women’s Health Protection Act in the House, which would protect a person’s choice to terminate a pregnancy and a healthcare provider’s ability to provide abortions. The bill was blocked by the Senate.

Sanchez believes in the right to choose as well, and hopes to “properly” fund Planned Parenthood to provide those services “increased access to contraceptives and safe abortions.”

Recent polls show a tight race between Rubio and Demings, so it is unclear whether Rubio’s seat will remain Republican or flip over to the Democrats.