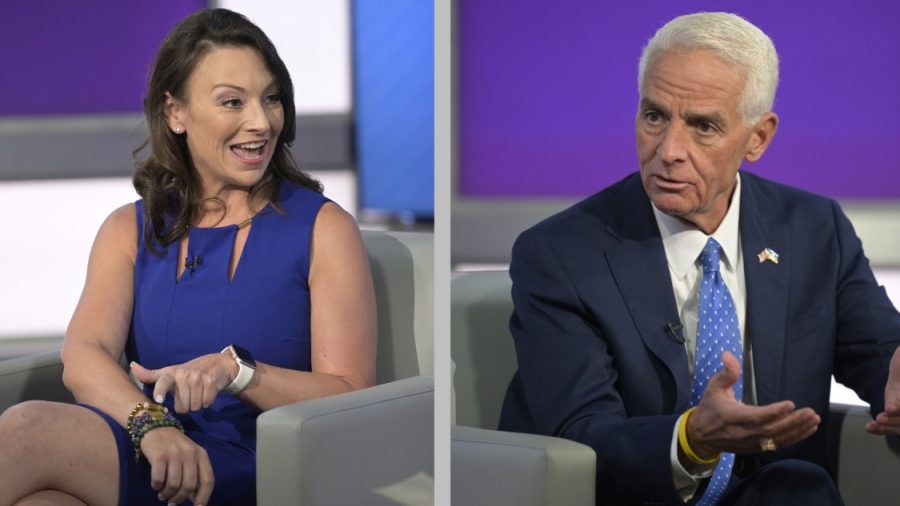 Currently, polls show Fried and Crist as leaders in the race. Fried is the only statewide elected Democrat at this time.

A defining characteristic or issue of this election is freedom, something DeSantis parades Florida as the center of. His “freedom agenda” includes parental rights and the rights of families, an economy that “outpac[es] the nation,” keeping Florida safe and beautiful, protecting secure and non-fraudulent elections and being pro-military and veteran-friendly.

In fact, California Gov. Gavin Newsom went so far as to air an ad in Florida on July 4 about freedom and attacking Florida Republican leaders, showing how central the idea of “freedom” is to the election in Florida this November.

“Freedom is under attack in your state. And Republican leaders? They’re banning books, making it harder to vote, restricting speech in classrooms, even criminalizing women and doctors,” Newsom said in the ad. “I urge all of you living in Florida to join the fight or join us in California, where we still believe in freedom.”

While Crist does not specifically campaign on the idea of “freedom for all,” he does have policy ideas for “justice for all.” He wants to reform Florida’s justice system by reforming sentencing and supporting SB 1032, which died in the Florida Senate. The bill would allow rehabilitation credits to include a high school or its equivalent diploma, a college degree, a vocational certificate, a drug treatment program, a life skills program or a reentry program. The expansion of conviction review units and the improvement of data collection are other reforms Crist has proposed.

He also invokes freedom in the “freedom to learn,” which involves his education plan.

As more teachers and school staff leave their positions and fewer people become school staff, Florida has been hard-hit and Crist finds it necessary to declare a teacher and staff shortage emergency. He also proposes increasing salaries for teachers and other staff, including more school counselors, to attract more people to the position or keep people from leaving; by 2026, the starting salary would be over $47,500 and the average veteran salary would increase to meet the national average of $67,000. Fried also would increase veteran salaries but did not cite specific figures. Crist would also qualify teachers for special risk retirement.

One of many factors pushing people away from teaching is gun violence, something that exploded again in national news in wake of the shooting at Robb Elementary School in Uvalde, Texas. Crist wants to “harden schools against gun violence.” While he does not provide specific changes in his education plan, his safety plan includes banning the sale of assault weapons, requiring background checks, “cracking down” on ghost guns and gun trafficking and requiring lost or stolen firearms are reported. Fried’s proposal to target gun violence is closing the gun show loophole and banning ghost guns and Daniel believes guns should not be sold to those under 21 and that the state should mandate training for all gun owners.

“From Governor DeSantis shaming children for wearing masks at a press conference, to the Legislature withholding school recognition grants for districts enforcing a federal COVID-19 mask mandate, the way Florida’s Republican leadership has treated the children of Florida is a disgrace,” Fried’s campaign website said. “I envision a brighter future for Florida. But we’ll never get there if Florida doesn’t have the best schools in the nation. When I’m governor, we will.”

Crist wants to open VPK programs to three-year-olds. Fried, while not adopting that proposal, has her own plan for VPK, including additional supplement spending to accommodate eight-hour work days for parents and mandating salary increases for childcare teachers from $11.78 an hour to $15.00.

The last proposal in his education plan is stopping “the unwarranted politicization of our classrooms and attacks on our educators,” something commonly used in reference to Florida’s controversial “Parental Rights in Education” law, more commonly known as the “Don’t Say Gay” law.

The repeal of the law is listed in his “Equality for All” plan. In addition, the plan suggests ordering an investigation regarding conversion therapy as child abuse and protecting gender-affirming healthcare; one act to protect gender-affirming healthcare, he believes, is firing Florida Surgeon General Joseph Ladapo, who rejected medical treatment for transgender youth. Like Fried, Crist believes that appointing regional LGBTQ+ liaisons would help keep him updated about any issues the LGBTQ+ community in Florida are facing.

“My message to LGBTQ youth of our state is this. Your existence is never inappropriate,” Crist said on his campaign website.

One of Crist’s unique plans is the establishment of “the Office for New Floridians,” to help people who just moved to the state.

In commonality, both Crist and Fried support legalizing marijuana, removing misdemeanor or third-degree felony marijuana charges, expanding Medicaid, affirming abortion rights and making housing more affordable in Florida through the Sadowski fund, rather than allocating it to an unrelated subject. Crist would issue an executive order protecting access to abortion and veto anti-abortion legislation that would be passed through the Florida legislature.

“Florida has never had a female governor. And it shows,” Fried said on her campaign website. “On my first day in office, I will work to repeal the regressive limitation on a woman’s right to make her own healthcare choices, HB 5.”

To learn more about each of the candidates, people can explore Fried, Crist, Willis and Daniel’s campaign websites.