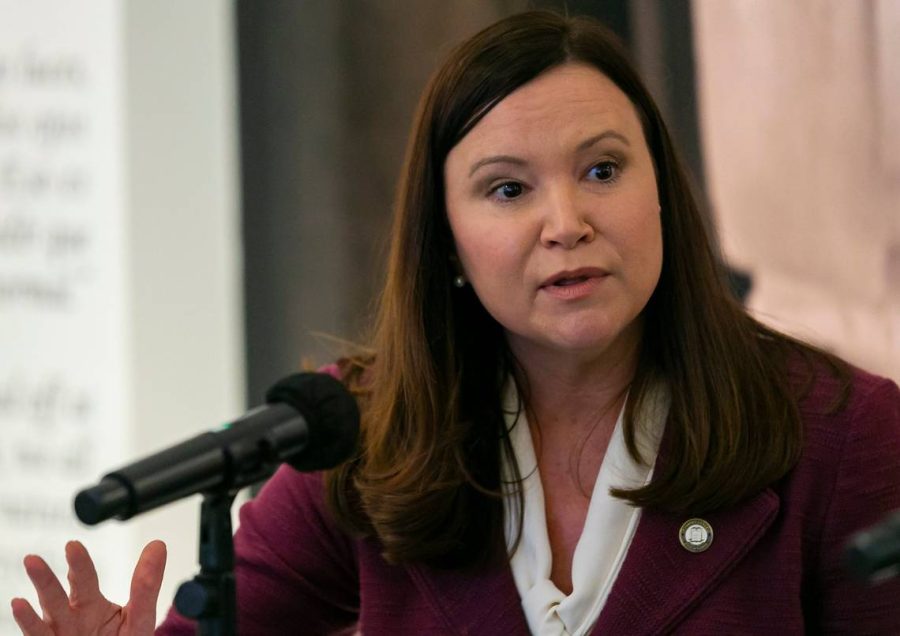 Attorney General Ashley Moody speaks during a roundtable discussion at the American Museum of the Cuban Diaspora in Miamis Coral Way neighborhood on Monday, February 7, 2022. Courtesy of Matias J. Ocner/TNS.

Republican incumbent Florida Attorney General Ashley Moody’s term is up. She ran uncontested and advanced to the midterm in November.

Ayala, Lewis and Uhlfelder all prioritize protecting abortion rights in the state of Florida. Ayala lists this as her “top priority,” though other issues that fall under the same branch of knocking down actions she views as “unconstitutional” by the state in recent months. She cites the “Parental Rights in Education” law, or the “Don’t Say Gay” law, and Florida’s redistricting map.

“Democrats need bolder leadership now. President Biden’s tepid “there’s only so much I can do” attitude in response to the Roe-leak and subsequent Supreme Court decision has been a case study in failure of leadership. Women—and Americans regardless of gender—want action to protect what for generations was a guaranteed freedom. The Biden administration has done nothing besides urge voters out in November. It is simply not enough. Where is the planning? We’ve known Roe was on the precipice of being overturned for nearly 60 days. There is plenty that could have already been done to protect women’s rights.” ”

Another priority of Ayala’s is keeping the separation of church and state, a topic that has been heavily debated in recent months, as religion is a central topic when speaking of abortion rights. In Florida, there was a lawsuit by a synagogue in Boyton Beach alleging that Florida’s 15-week abortion ban violates their freedom of religion. Another case that involves this argument is the Supreme Court case that allowed a high school football coach to pray before a game on the field.

One of Lewis’ top priorities is cooperating across party lines, instead of following the common pattern of increased partisan tensions. A Pew Research Center study showed that partisan hostility is rising among Americans.

“It’s time to move away from extreme partisan politics and work together for the people of this great state,” Lewis’ campaign website said.

In a similar line, Uhlfelder prioritizes defending democracy from what he calls “GOP assaults.” He cites Moody, who signed a letter supporting Texas Republicans that filed a lawsuit in an attempt to overturn the 2020 election.

Environmentally, Ayala would decrease Florida’s usage on fossil fuels by transitioning to clean energy, crack down on illegal polluters and expand access to safe drinking water for all. Lewis also wants to protect the environment by prosecuting people who threaten Florida’s natural resources.

Uhlfelder’s priorities include targeting utility companies, oil companies, corporate developers and insurance companies that raise prices too high for consumers to be able to pay.

In the race to be Florida’s Attorney General, it appears that the Supreme Court’s overturn of Roe v. Wade is central to the fight, though it remains to be seen which side Florida voters will choose.