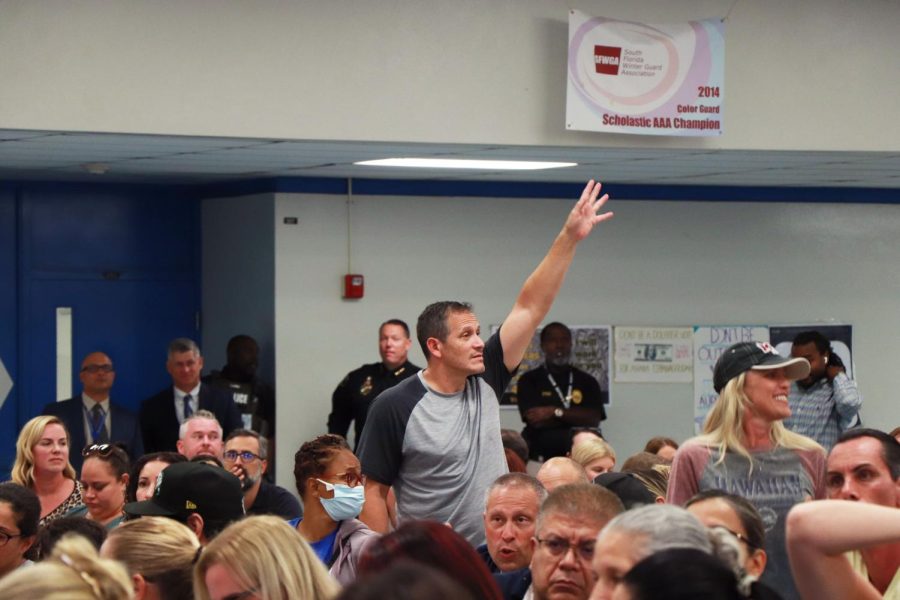 Keep ‘em Coming. A community member urgently raises his hand to ask a question at the Oct. 3 boundary meeting. After the demographer Joseph Beck went through the PowerPoint, the floor was opened up for questions about the process.

Within BCPS, all proposals for boundary changes are made by the community and then evaluated by the BCPS Demographics and Enrollment Department and the School Board of Broward County. While the goal of this is to ensure community members have ample say in the process, it has caused division within the community.

The school administration was not involved in drafting any proposals. However, Principal Michelle Kefford did make one request of the district when they consider proposals next semester.

“I have asked that once kids establish themselves here not to pull them out, so that if and when the boundaries are changed, the kids who are currently here are to be phased [out] and allowed to finish their years at MSD,” Kefford said at MSD’s Sept. 14 School Advisory Committee meeting. “But it is up to the district, I just want what’s in the best interest for the kids.”

Actual proposal making can be tricky. Each one has take into account a list of factors that could make the proposal unusable or more favorable to the school board. Proposals also impacts the school’s enrollment numbers. In order to submit a proposal, a community member had to make an appointment with BCPS demographer Joseph Beck. Meetings were held via Microsoft Teams.

The idea that MSD is “Parkland school” is a common community misconception. While MSD’s address is within Parkland city limits, the reality is that 39% of students are Coral Springs residents.

School boundaries follow county lines and population numbers and are not decided by city limits; MSD is both a Parkland and Coral Springs school. Since it opened in 1990, MSD has always included students from both cities in its boundary.

However, even after this clarification, the partisan split in the community was evident at both community meetings.

Many Parkland parents were asking why their neighborhoods are included in some of the proposals and why the district is not automatically removing Coral Springs neighborhoods to reduce school population.

Coral Springs residents at both meetings brought up removing East Parkland neighborhoods since they are outside of the 2-mile walking radius for students.

All proposals were due to the demographic department on Oct. 31 in order to give time for review before the second meeting with the community on Nov. 3. Demographics officials at this meeting discussed each individual proposal that was submitted, including factors that would be considered for each.

A total of 16 community proposals were submitted; however, two were withdrawn before the meeting, leaving 14 active proposals.