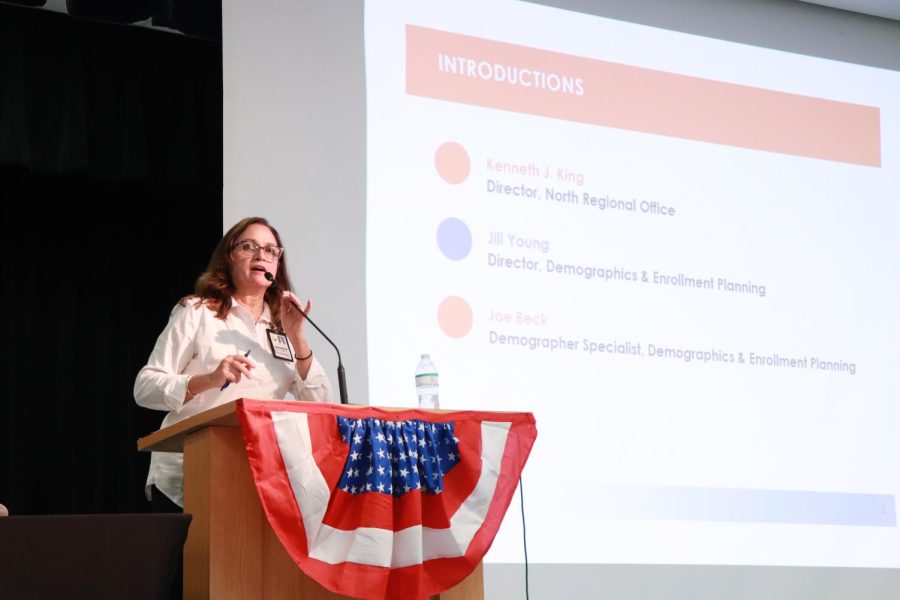 Selection day. Demographics & Enrollment Planning Department Director Jill Young introduces herself and explains her role in the process at the Oct. 3 meeting. The meeting provided information about the need to change MSD’s boundary lines, what the process will look like and how the community could participate in the process.

In an additional effort to reduce overcrowding, MSD administration has attempted to remove all students that are currently living at an address outside of the MSD boundary. The guidance department required all students to re-register at the end of the last school year, in order to verify addresses before students could receive a schedule for this year.

Any student who moved outside the MSD boundary was unenrolled and required to go to their local school or apply for reassignment to another school. Some students were allowed to remain until the end of the last school year and had to attend their zoned school for this year.

The only exception to this rule are students with parents or guardians that actively serve in the military or students whose parents work for BCPS; they are allowed to apply for reassignment at schools within the general geographical area of their work location.

The crackdown on those living outside the boundaries continued throughout the summer; all submitted registrations were heavily reviewed by the MSD guidance department to ensure that the registration reflected accurate information about the student’s address. Any person that attempted to register under an address that does not fall into the MSD boundary or a false address that the student does not reside in was turned away.

“I would not have reported them because it is not my business whether or not they are zoned for the school,” junior Carly Rogalla said. “You never know what is happening at home or why someone is attending Douglas rather than another school they are zoned for.”

While many parents at the Nov. 3 boundary meeting made it clear that they wanted all these students identified and removed, it is more complicated for some students.

“I understand the people who want to make the boundaries smaller, but I think they also have to consider others’ thoughts; most parents and students want to go to the best public school in the area, and MSD is,” sophomore John* said.

“It was important academically and socially because the school has great class options with all sorts of Advanced Placement options,” John* said. “But also, with COVID, it made me more shy and it was a bit harder for me to make friends. The people I did know were coming to this school, and we didn’t want me to start over [with] a new social group.”