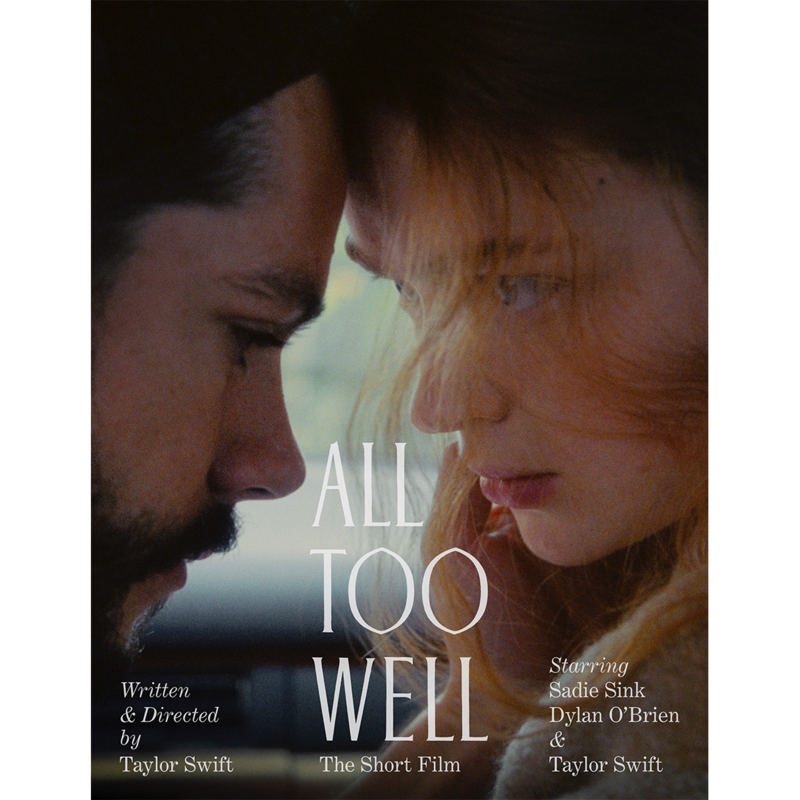 Taylor Swift releases ‘All Too Well: The Short Film’

[Review] “All Too Well: The Short Film” is the perfect companion for “Red (Taylor’s Version)”

With the release of Taylor Swift’s newest re-recorded album, “Red (Taylors Version)” coming out Nov. 12, Swift is at it again, shocking fans in the days leading up to its release. Swift will be adding eight never heard tracks (also known as vault tracks) and a 10 minute version of her song “All Too Well,” which has a short film to go with it.“All Too Well: The Short Film” stars Sadie Sink and Dylan O’Brien. The film is directed by Taylor Swift and premiered on YouTube at 7:00 p.m. on Nov. 12. It is 14 minutes long and has Swift’s 10 minute “All Too Well” playing in the background, as the film represents the song.

While not confirmed, many believe the song (and therefore the short film) portrays Swift going through her breakup with actor Jake Gyllenhaal after they dated for about three months in 2020. Sink is believed to portray Swift and O’Brien as Gyllenhaal. I think these actors were a good choice because they have a large age gap, just like Swift and Gylllenhaal did, which is mentioned many times throughout the film with the lines like “I’ll get older, but your lovers stay my age.”

I really liked this film, as it had a very innocent-feeling relationship but then pictured intense emotions that made me feel “ok but not fine at all” mainly through Sink’s performance. I feel like it perfectly put the song “All Too Well” into pictures by doing things like Sink’s character leaving her red scarf with O’Brien’s character, which is represented in the line “I left my scarf there at your sister’s house.” Swift’s red scarf being left with Gyllenhaal has been a very popular topic that many analyze to mean something more.

The film also shows the “dancing around the kitchen under the refrigerator light” line which many fans were happy about. This line feels like it was a very sweet and innocent relationship when in reality that’s not what it was like at all which is shown by Sink’s and O’Brien’s argument in the kitchen right before this line was said.

The film shows fans what Swift was really feeling during these times, and although her music tells a very clear story, it was nice for fans to be able to see an actual picture played out for certain lyrics.

I also really enjoyed the setting of this film as well; it feels like a very comfy and warm small town during autumn season. In the trailer for the film, it shows an old fashioned car driving down a street covered in color changing leaves.

Due to Swift being the queen of easter eggs (also known as a hidden hint or reference to something,) many fans have already been looking into things that were put into the film that could show signs for her next re-recorded album. Many believe that “Speak Now (Taylor’s Version)” could be next.

I really enjoyed this film and I would love to see Swift do something similar in the future with another re-recorded song. I think it perfectly represented the song “All Too Well” and was a success for Swift and her message.

Taylor Swift’s “All Too Well: The Short Film” sparks controversy

After the release of Taylor Swift’s short film for the 10-minute version of her song “All Too Well,” the media went into a frenzy discussing the age gap between the two lead actors. Swift’s fans, more commonly known as Swifties, used social media to share their views on the so-called controversy.

The 15-minute film, written and directed by Swift, stars “Stranger Things” actress Sadie Sink and “Teen Wolf” heartthrob Dylan O’Brien. It takes viewers on the journey of one of Swift’s past heartbreaks, which is rumored to mirror her three-month relationship with actor Jake Gyllenhaal.

Sink, who is 19 years old, and O’Brien, who is 30 years old, play the parts of two individuals in a romantic relationship, with a variety of shots ranging from them kissing and cuddling to them yelling at each other and ultimately ending the relationship. The 11-year age gap between the actors caused some discomfort to the audience, and Swifties had something to say about it.

Lyrics in the song such as, “You said if we had been closer in age maybe it would have been fine, and that made me want to die” suggest that the age gap between Swift and Gllenhaal played a large factor in the collapse of their relationship.

Fans on social media discussed if it was right for Swift to display this age gap in her film, feeling conflicted as to whether or not she should have casted Sink and O’brien.

“Taylor Swift casting Sadie and Dylan was just a perfect choice. You’d first think ‘wow she’s a kid and the age gap is kind of uncomfortable’ and then you realize [that] Taylor was around the same age, and it just makes you feel more for her as a 20-year-old girl,” one Twitter user said.

Not to mention the actors, who were hand-picked by Swift, are of legal age and would theoretically be able to date in real life.

Although, their main purpose was to give fans a new, troubling perspective of Swift’s brief relationship, showing that the age gap was, at the time, unnoticeably toxic for the couple and not just Swift “going after older men.”

The difference in age between Sink and O’brien is supposed to make viewers uncomfortable. A large amount of the responses from fans are them reflecting on their own relationships and breakups.

“Wow, wish I [was able to listen] to Taylor Swift when I was 17 so I had something to tell me the 9 year age gap with my then 26-year-old boyfriend was a bit weird,” a Twitter user said.

Swifties are able to decide for themselves whether the age gap was acceptable. However, the casting of the actors wasn’t in their hands. The final cut of the film goes to show that the representation of the age gap was detrimental to the story line and gave viewers a clear understanding of Taylor’s feelings throughout an unhealthy relationship.