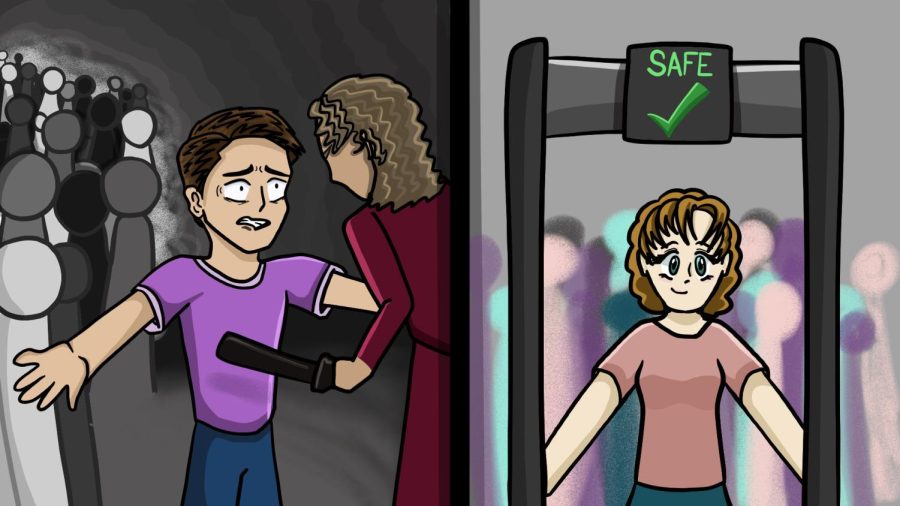 MSD students consider the pros and cons of instituting metal detectors at school.

[Opinion] Whether or not schools should have metal detectors

[Opinion] Schools should have metal detectors

In the last two decades, weapon use and violence has been at an all time high in America. This is partially due to larger populations and more people to keep track of. This being said, gun violence has become a large problem for schools across the nation.

This leads us to a controversial topic:Should schools use metal detectors? One of the larger pros to the use of metal detectors is safety as they would allow schools to find guns and knives before potential violence occurs. This could ultimately put an end to the recent massacres around the United States.

The mere presence of metal detectors can invoke fear in those who want to hurt others. Fear of detection is the same reason why most criminals would never bring a weapon on a plane, for example. Schools can work similarly to an airport just less crowded and without all of the stress. Students should not be forced to worry about violence in places like school.

Metal detectors are decently advanced technology that can change school safety forever. Sure, metal detectors are expensive and time consuming to use but it is worth it if schools can resort back to being safe zones for children. School is a place for learning and students should not have to fear anything more severe than a large exam.

[Opinion] Schools should not have metal detectors

After the plan for metal detectors at Marjory Stoneman Douglas High School was scrapped more than three years ago, the Broward County School Board has now revisited the idea, but with a brand new perspective.

For every school in Broward County, there will be at least one metal-detection wand, which will be used by trained officers to investigate random or suspicious students. Needless to say, there are many issues with the “solution” being supplied here.

There is, of course, the issue of the lack of foresight being used. Just as students ask their peers from the period right before about how hard a pop quiz is, students will continue to ask their friends when random searches happen.

Raymond Adderly, a Fort Lauderdale High School student, said to the Sun Sentinel, “Students are smart enough to know when this is going to happen. A student gets to school late and someone texts them that there’s a random search today.”

The inefficiency of the investigations all has been on the minds of both students and teachers alike. With MSD being a rather large school of roughly 3,600 students, there is absolutely no possible way to check every single child at a regular pace. Even if the officers somehow manage to get to everyone, the class time that will be taken away is very concerning.

Many classes at MSD are very large, some even having anywhere between 30-40 students. For the procedure being suggested, students must take anything that might trigger the metal detector off of their person and out of their bags. They would then be waved down with the wand one-by-one, and assuming no one triggered the detector, students would have to put everything back in their bags before going to class.

Clearly, this method is taking away from valuable learning time. There is a higher chance of setting all students on edge, rather than making them feel reassured about their safety and security.

Instead, it would be better to put more effort into the students’ mental health and well-being, rather than simply dealing with it after the fact. While there is already something that resembles a mental health seminar–a 5-minute video played once a month in English class–it doesn’t focus nearly enough on the issues that will actually cause students to bring anything against school policy.

While in theory this sounds like a wonderful idea, in reality, there is no conceivable way for this to work. There needs to be a better plan in place before we rush towards a prison-like atmosphere that feels more like a containment center than a school.