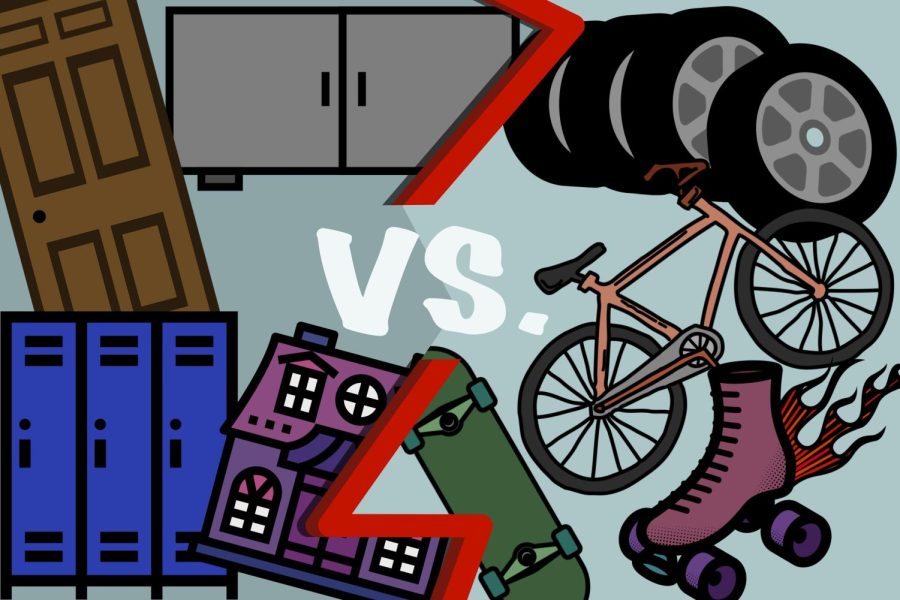 The newly discussed debate between doors and wheels has everyone wondering if there are more doors or wheels in the world.

[Opinion] Being in ‘Team Doors’ is like having ‘flat earth’ mentality

Scrolling through the popular social media platform TikTok, you will likely stumble upon a person discussing the wheels and doors debate. With 43 million views under the #DoorsVsWheels hashtag on TikTok, several Marjory Stoneman Douglas High School students have brought the topic to school, debating on whether there are more wheels or doors in the world.

This debate is very creative and fun, as nobody can physically count every wheel and door in the world. However, I believe there are more wheels than doors.

First off, wheels get replaced very often, but have you ever had to replace your door? On the other hand, drivers change their vehicle tires approximately every six years. People claim that car wheels and doors cancel each other out. However, they are forgetting that not every car has only four tires, some have six tires. Also, every car needs a steering wheel.

Not to mention, almost every toy car, like hot wheels, has wheels, but not accessible doors. As the toy doors do not actually open, making them invalid in the total count. Over four billion hot wheels have been produced since 1968.

“Team Doors” may contend that hotels utilize thousands of doors. However, every hotel room typically has an office rolling chair, cabinets and drawers.

I could go on and on about the amount of wheels compared to the amount of doors in the world, like wagons, trains and other wheel-operated machinery, but I think I’ve made my point.h

Gen Z consistently finds new amusing debates, like “is water wet?,” “what color is the dress?” and “what color is the shoe?” Also, people have formed more questions similar to “wheels vs doors” like whether there are more blades of grass or more strands of hair. However, this particular debate has generated a lot of attention and people deserve to know the answer: there are more wheels.

If you are keeping up with TikTok trends, you probably know of the wheels and doors debate. It is a hot topic for MSD students who, like the rest of TikTok users, are trying to come to the conclusion of whether or not there are more wheels or doors in the world.

While no true conclusion can be reached to this debate, unless all nations’ leaders come together and mandate a national count of wheels and doors, the people of TikTok can make the accurate assumption that there are obviously more doors than wheels.

To begin this strenuous debate, the definition of a door, according to the Oxford Dictionary, is a hinged, sliding or revolving barrier at the entrance to a building, room, vehicle or in the framework of a cupboard. This definition encompasses all physical entrances to a space, such as front doors, room doors, cupboards, drawers, car doors and more. It also involves doors of different sizes, from extraordinarily large sizes to a molecular scale.

Now, to go over the basics, doors can be found just about anywhere that holds shelter. You can find a plethora of doors, including drawers, closets, shower doors, microwave doors, oven doors and more, within a small neighborhood. Thousands of doors can even be located in single buildings, like skyscrapers, schools, hotels and motels. In each of these public building types, there are similar home amenities that feature doors and, on top of that, bathroom stall doors and elevator doors.

It is also plausible to consider that there are double doors in some entryways, so the amount of doors would be multiplied by two in those cases.

On a smaller scale, several thousands of doors can also be accumulated through multiple working entryways in doll houses. Since “Team Wheels” insists on bringing toys into the matter, and, to get more technical, doors exist within thousands of architectural models created across several nations everyday.

On a further note, technically, doors exist within ourselves. The epiglottis, in short, is a flap of cartilage that prevents food and drink from entering into the windpipe. It acts as a hinged barrier that encompasses a space, so it can be counted towards the argument. There are 7.9 billion people on Earth, so it is safe to say doors have a surmountable lead.

While “Team Wheels” attempts to take the approach that with doors, like drawers, comes wheels, there is an overwhelming amount of doors that exist in areas completely without wheels, as listed above.

The wheels and door debates is just another light-hearted, fun argument for Gen Z to prevent them from experiencing boredom. With an indefinite answer, ways to argue for more doors or wheels has exceeded creative standards. Regardless of its uncertainty, I think doors have this debate in the bag.