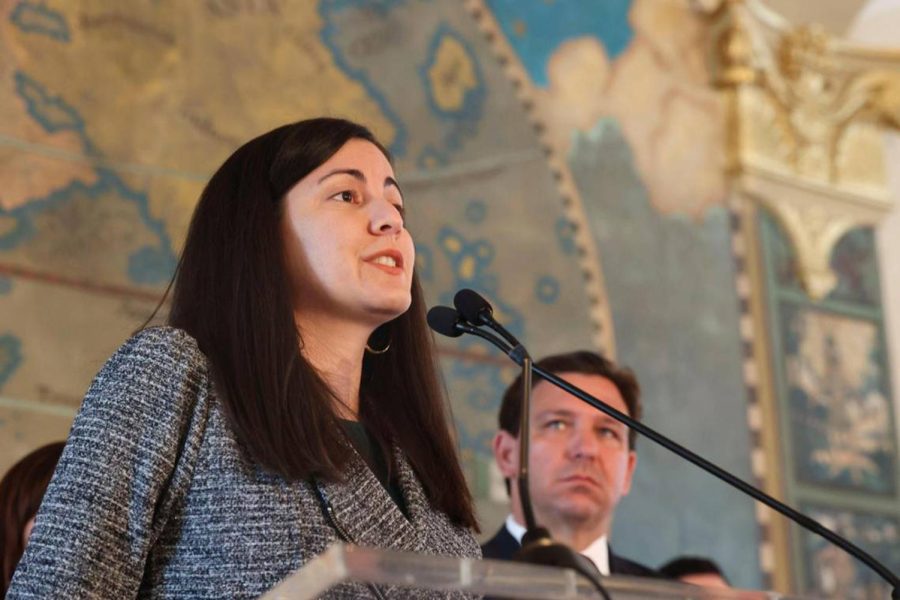 Rosa Maria Paya speaks about her father while Governor Ron DeSantis watches during a Honoring the Victims of Communism press conference at the Freedom Tower in Miami on Monday, May 9, 2022. Paya’s late father, Oswaldo, will have a plaza named after him. DeSantis later signed Senate bill 160 to make this designation. Courtesy of Alie Skowronski/Miami Herald/TNS.

Communism is an economic system characterized by publicly-owned property and need-based jobs. Critics of communism believe that communism and ruling by totalitarianism and political repression place restrictions on human rights and promote censorship.On Monday, May 9, at Miami’s Freedom Tower, Florida Gov. Ron DeSantis signed House Bill 395 into law, making every Nov. 7 a state-wide “Victims of Communism Day.” The day will be observed in the state capital and schools across the state.

Beginning in the 2023-2024 school year, public schools will recognize Nov. 7 “as a day honoring the 100 million people who have fallen victim to communist regimes around the world,” according to DeSantis at the press conference where he signed the bill.

In addition, the law requires that United States Government classes in high school must provide specific instruction for at least 45 minutes about victims of communism. The instruction will include topics related to communism, communist regimes and “how victims suffered at the hands of these regimes,” according to a press release from DeSantis’s office.

HB 395 gives examples of “these regimes” as Vladimir Lenin, the founder of Soviet Russia, and Karl Marx’s economic philosophies gave “rise to such infamous totalitarian dictators.” The “infamous totalitarian dictators” in the bill include Joseph Stalin, the leader of the Soviet Union from 1922 to 1953, Mao Zedong, the founder and leader of the People’s Republic of China from 1949 to 1976, and Pol Pot, Prime Minister of Cambodia from 1975 to 1979 and a leading member of Cambodia’s communist movement.

“Next July will mark the tenth anniversary of the killing of my father at the hands of the Cuban regime. As thousands of Cubans have done before and as we talk today, at least 1,000 Cubans are suffering political imprisonment for peacefully marching demanding freedom,” Cuban human rights activist Rosa María Payá said via a press release. “It is time to stop this process, this factory of victims of communism. I appreciate this initiative, and the fact that we are honoring the victims of communism by teaching young people about the evils of communism and the moral obligation we have to stop it.”

While some have praised the actions of the Florida legislature and DeSantis, others feel that there is a level of hypocrisy occurring. Critics cite Florida’s retirement system’s investments in Russian-based entities, which were valued at around $300 million before the value of the Russian ruble decreased with the invasion of Ukraine.

Given Russia’s history with communism, some feel as if the effort to remember victims of communism is insincere.

“The trauma of our families that fled Cuba’s dictatorship is real,” student activist Sofia Hidalgo tweeted. “DeSantis’ attempts to deliver for Cubans are not. He continues to ignite culture wars under the guise of fighting ‘communism’ while embodying the same authoritarian power grabs we are all too familiar with.”

Others, like Equality Florida’s press secretary Brandon Wolf, believe that DeSantis should be focusing on more “relevant” issues to Floridians.

However, DeSantis and supporters of this bill say this issue is relevant to Floridians and people around the country, as they note the rising appreciation and favorability of socialism in the U.S.

DeSantis claimed at a press conference that there are “probably more Marxists on college faculties in the United States than there are in all of eastern Europe combined” because young people “don’t really know that much about what communism meant in practice.” He did not provide specific data for his claim.

HB 395’s co-sponsor Representative David Borrero cited a 2020 poll from the Victims of Communism Memorial Foundation on the House Floor. The poll checked for American attitudes towards socialism and communism, two different systems.

The poll found growing favorability toward socialism among younger voters, including Millenials and Gen Z. The foundation found that 40% of Americans overall have a favorable view of socialism, while 49% of Gen Z have a favorable opinion of it.

When I heard about this new holiday, I thought it was ridiculous. I understand what the governor is doing, and I think there is some merit to it, but I think he’s going about it incorrectly. […] Communism is an economic way of governing一that’s it. Communism does not mean suppression of freedom or freedom itself; it is simply a monetary form of governing. The thing most people confuse communism with is totalitarianism. Over the years, politicians have used communist ideas interchangeably with the concept of a dictatorship, but people forget that capitalism could just as easily lead to authoritarian governments.”

“Sadly, as the governor mentioned, throughout college campuses and throughout this country, we are seeing communism and socialism being romanticized,” Nuñez said. “Positive attitudes are at an all-time high, here in this country. But, not here in Florida. Because freedom, not Marxism, has a home here in the free state of Florida.”

Nuñez also spoke about how the bill’s signing represents a larger effort by the current administration to give rights to parents by eliminating subjects that they believe parents do not want their children to learn about. Among those efforts are the “Don’t Say Gay” bill, the banning of math textbooks that include Critical Race Theory and Social Emotional Learning, parental input for school library books, and now, HB 395.

“By the actions we’re taking today, along with the actions we’ve already taken一like removing CRT, woke ideology from our classroom, making sure parents have that right一to empower parents to make decisions for their children. Free of socialist ideology, and CRT and woke terms that we will not allow,” Nuñez said.

DeSantis has not yet announced where else people may see the day observed, but public school students will observe the day in their U.S. government class every year on Nov. 7.

*Names were changed to protect the anonymity of students at MSD