Review: “Jumanji: Welcome to the Jungle” does 1995 version justice 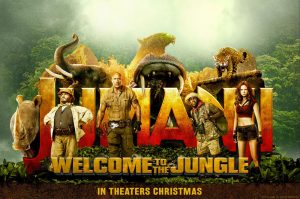 On Dec. 20, “Jumanji: Welcome to the Jungle” was released as a comedic new adaption of the original 1995 movie, “Jumanji.” Directed by Jake Kasdan, the film received a 77 percent on Rotten Tomatoes.

In this bustling movie, four high school students come across an old video game console when they are sent to detention. Spencer Gilpin (Alex Wolff) plays the ringleader, convincing the other teens to play the game with him.

They are able to choose their characters and eventually are taken into an alternate jungle-like reality. The students must not only come to terms with their new bodies, played by Dwayne “the rock” Johnson, Jack Black, Kevin Hart, and Karen Gillan, but also save the video game world from the curse that consumes it.

After Bethany Walker (Madison Iseman) is eaten by a hippopotamus but somehow reappears, the kids begin to realize that they must go on crazy adventures in order to beat the game.

The group then encounters Nigel (Rhys Darby), who explains the game to them. In order to win, they must return a gem to the statue of a jaguar. With determination, they walk through the forest and are faced with multiple obstacles that unite their skills and develop their characters.

After more characters seem to die but are brought back to life, Spencer comes to the conclusion that they all have a certain amount of lives, which are marked on each of their arms.

The gang continues to discover new wonders of Jumanji, coming across Jefferson “Seaplane” McDonough (Nick Jonas), who was trapped in the game for 20 years. Upon this discovery, the group realizes the seriousness of the situation due to the impact that Seaplane’s disappearance had on the real world.

I enjoyed the synergistic effect created by the insertion of comedy in seriousness of a life-threatening plot. The movie covered self image issues between characters in a way that is not generally approached, making “Jumanji: Welcome to the Jungle” not only an interesting film, but also a unique message.

Overall, this movie was entertaining, yet also had a serious underlying message of self-acceptance. This film really did the original 1995 version great justice.