Senior Katherine Quartana stays true to her own art form

by Chai-Lyn Christian and Megan Veerasammy

Senior Katherine Quartana has had a passion for art since she could first hold a pencil. A day has not gone by where she has not thought about art and all the things that could be transferred from her mind onto her paper.

Quartana is currently taking CAP 2D Studio Art at Marjory Stoneman Douglas High School which is taught by Jacquelene Lieberman. She has been taking art since sixth grade and continues to develop new styles of art.

“My favorite art technique for traditional art is watercolor pencils. These special pencils make it easier for me to blend colors together since they were made to be mixed with water. For digital art, I tend to use different paintbrushes and airbrushes to shade,” Quartana said. “Airbrushing is useful for helping me figure out where to put shadows, while paintbrushes make it easier to add texture or light effects to a piece.”

Quartana is a very versed artist with many skills. She has used and developed them throughout the course of her art career, and hopes to expand upon her talents.

Quartana’s main style tends to be more animated with pops of vibrant colors. She leans to vibrant colors more often because she feels that bright colors accentuate positive feelings. As an artist, her main goal is to channel her emotions into her work through her bright colors.

Like many great artists, Quartana has experienced hardships along the journey of her artistry. One being that since she leans towards more cartoon art, which was not necessarily embraced due to the focus of realism, it soon led her to become discouraged with her surrealist artwork.

“Most high school classes try to steer their students away from ‘cartoony’ themes and more towards serious art topics like realism and conceptual art. So I often drew things for assignments that I thought would be more acceptable in an art program,” Quartana said. ”Yet I wasn’t proud of anything that I made and came to hate a lot of my art from that period onward. I realized that if I wasn’t passionate about what I was drawing, then I would never be satisfied with the result”

The mindset of doing artwork that Quartana is proud of, has helped her become more confident in her skills. She has even made some of her favorite pieces after her awakening.

“The Mirror” is one of Quartana’s favorite art pieces because it allowed her to come to the realization that even though her art style is unique, she shouldn’t worry about expectations but do what she enjoys. This piece holds a special place in her heart because it signifies hurdles she has faced in her career is that her type of art is not accepted in class.

Quartana is influenced by a variety of inspiring artists and directors which have helped her realize that art is something that truly pushes her to her maximum.

“Hayao Miyazaki is one of the people that greatly inspires my art. The Studio Ghibli movies are beautifully animated and have a one of a kind art style that never ceases to amaze me,” Quartana said. “One of my favorite movies is Spirited Away’ which is filled with breathtaking landscapes and unique character designs. I hope that one day my art will be able to create the same feelings of amazement and wonder as Miyazaki’s.”

Quartana will forever look up to Miyazaki, and she aims to make people as happy to see her artwork as she is to see Hayao Miyazaki’s.

Quartana grows an artist every day and will take all of these learning moments forwards in her soon-to-be career. 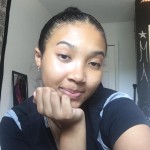 Megan Veerasammy is a freshman at Marjory Stoneman Douglas High School. She is a first-year staff member for the Eagle Eye. She enjoys traveling, watching Netflix and hanging out with her friends.