On Tuesday, Oct. 27, the Marjory Stoneman Douglas Women’s Varsity Volleyball team started their fall season at home against the Cooper City High School Cowboys. They also had their second game on Thursday, Oct. 29 against the Coral Springs Charter Panthers.

The team started their first game on Oct. 27 strong by winning the first point of set one. Senior Isabella Mercer (3) had an amazing block to keep the Cooper City Cowboys from scoring a point, keeping Douglas in the lead.

They had multiple great plays from their seniors Mercer, Sofia Cheremeta (6) and Megan Pittman (25). With them playing a great first set plus great energy from the whole team, they came out and won the first set 25-22.

With the Eagles starting off the first set strong, it kept the momentum going for the rest of the game. They were ahead of the Cooper City Cowboys by winning the first set. Following this first set, they went into the second set determined to win. They started the set winning the point, keeping their high energy alive.

While winning the game 16-11, Jordan Roberston (9), one of two sophomores on the team, had a great serve, helping them win the point. The whole team was doing great with keeping up a rally with the other team.

Keeping their winning streak alive, the Eagles were continuing their rally until someone from the Cowboys had a rocket of a hit. Julie Van Arsdale (5) had a great save at the net when this shot came in, which kept the teams’ rally alive.

After dominating the second set, it came down to game point. Robertson and Arsdale had a great block to win the game point, which resulted in a win for the second set 25-17.

Going into the third set after the Eagles dominated the first two, all they had to do was win this set and win the game.

The set started rocky for the Eagles. Robertson had a great hit in between the setter and the Libro to get the Eagles the point and put them ahead by 2 points. Even with such a close set like that one, the Eagles lost the set.

Going into the fourth set, they were determined to win this set and take their first win of the season under their belt. The Lady Eagles started to slow down, but when Megan Pittman (25) had a great hit to keep them in the game.

After an up and down game so far, MSD tied up the game at 16-16. After they went down in the score, Mercer had a great serve to tie up the game.

Douglas started to lead the game 23-22, which meant it was game point for them. All the Eagles have to do here is win this point and our Eagles win the game. That is exactly what the team did. After an intense game, Douglas took the win.

Even with great hits from our players in the first two sets, we ended up losing them, but there is still hope to get the same back.

They got into the third set ready to play. The set began with the Eagles serve and winning the point.

After the momentum with winning the first couple of points, the gym was loud and everyone started cheering on the Eagles.

After giving up the point on a bad call by the referee, the Eagles were eager to get back the point, which was exactly what happened.

After a pretty hard third set, the Eagles pulled through with the points and won the set 25-23.

The Eagles are back in the game. It didn’t start off on a good foot for the fourth set. With the Panthers getting every ball, it didn’t look good.

After a well played game, the Eagles unfortunately lost to the Coral Spring Charter Panthers. They played hard and strong and didn’t give up. The Lady Eagles are looking forward to their next game at home on Nov. 2 at 6:00 p.m. against South Plantation. 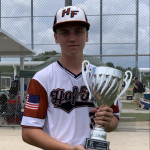 Josh Aldeus is a freshman at Marjory Stoneman Douglas High School. He likes to watch and talk about sports.