The CW’s hit television show, “Gossip Girl,” has been circling Instagram and Twitter over the past few weeks with talk about a new, more diverse reboot coming out in 2021.

The original series came out in 2007 with Kristen Bell as the narrator. According to Insider, Bell will return as the narrator for this upcoming show, with an entire different cast. The show is set to be from the perspective of New York teens eight years after the original website, where all of New York’s drama was mentioned, disappeared.

At the moment the show will have ten episodes and one season including series’ creators, Josh Schwartz and Stephanie Savage, will be involved in the process with casting, story writing, etc. The key components of the reboot include more “non-white leads” and “a lot of queer content,” producer Joshua Safran said.

There will be mentions and parallels to previous characters of the original series. However, the reboot isn’t a sequel or continuation of the show, it is a new and fresh perspective.

The show is also planned to attract a new generation to the phenomena that is “Gossip Girl.”

According to Deadline, the production began in New York on Monday, Nov. 2, 2020. The first teaser hit Instagram on Friday, Jan. 1.

“I have high expectations of this reboot since HBO has been known to make good shows,” Marjory Stoneman Douglas High School sophomore Gabriella Campos said.

Others have different opinions on the reboot, with many comparing this version to the original.

“I think [the reboot] will be worse than the original show,” freshman Liza Zand said. “Gossip Girl is an iconic show with a great storyline. It will be very hard for this reboot to stand up to the high expectations of the original show.”

Whether this reboot will be a fan-favorite or a failure, only time will tell. Let’s sit back and observe East Upper Siders. 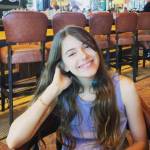 Sofia Schorer Kaplan is a freshman at Marjory Stoneman Douglas High School. She enjoys reading, writing, traveling, and painting. Sofia was born and raised in São Paulo, Brazil, and fluently speaks Portuguese and English. She is a member of DECA, Best Buddies, and the Girls Who Start club.