According to RAINN, the nation’s largest anti-sexual violence organization, among undergraduate students at college, 23.1 percent of females experience rape or sexual assault through physical force, violence, or incapacitation.

Starring Elizabeth Bennet and Taylor Dearden, “Sweet/Vicious” follows one of these victims, Jules Thomas (Bennett), and her fellow classmate Ophelia Mayer (Dearden) as they become vigilantes of sorts to try to bring justice to those that get away with sexual abuse and assault on her college campus.

Many television shows shy away from the controversy that is teenage and college rape. However, not only does the new MTV show “Sweet/Vicious,” which just aired its first season, acknowledge the seriousness of the situation in today’s society, but it attacks those that participate in it and dismiss rape culture head on.

Here is the trailer.

For this reason alone, this show is very important in popular culture since it not only informs teens about sexual assault on college campuses, but it also shows options for when teens defend themselves and report their assaulter.

And yet, the show offers so much more than that to its viewers.

The show’s storyline and brilliant pacing in playing out every episode is the backbone of the show. There is a great balance between new storylines each episode and the underlying storylines that run deep throughout this strong first season. The creators were able to skillfully add in bits and pieces to the season’s story each episode, leaving viewers always wanting more.

Furthermore, the wit of the show appeals to today’s generation immensely. Not only does the show not shy away from some controversial, sarcastic humor- it embraces it. While still managing to be classy and not offensive, the somewhat-goofy tone was fast and extremely charming, and a unique look at today’s comedy in pop culture. 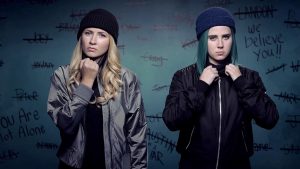 The characters who perform the balancing act of silliness and serious emotion in the show are what make it worth watching. The main duo of Ophelia and Jules are extremely relatable and watchable, with layers of complex character traits making them even more appealing.

Jules is a seemingly regular sorority girl, with a great best friend and a fashion sense straight out of a magazine. Little does everyone else know that she was raped last year by someone close to her, and the school did nothing to help her after the trauma. Bennett is able to play off of Jules’ range of emotions and personalities that she puts on in front of different people. As she endures unimaginable emotional pain and rage, Bennett strikes the viewer in the heart with Jules’ feelings.

Ophelia, though, is one of the most unique characters on modern teenage television at the moment. She is a trust-fund stoner kid with green hair and is the source of a majority of the comic relief in the show. And yet still, throughout each episode, it becomes evident that Ophelia could have secrets and issues of her own to be discovered in time.

While obviously crime-fighting action and complicated romances keep the viewers on the edge of their seat, arguably the most fun aspect of the show is the budding friendship that blooms between Jules and Ophelia as they begin to trust each other over all others, despite their obvious differences.

Overall, “Sweet/Vicious” does a spectacular job in describing a heartwarming and emotional story of female empowerment that embraces their complexity, intellect, and beauty.

Rebecca Schneid is a junior in high school. She is one of the Editors in Chief for the Eagle Eye. She enjoys reading, playing soccer, playing guitar, and going to the beach.