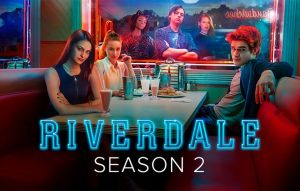 On Thursday, Dec. 13, the hit TV show “Riverdale” released their mid-season finale. The episode was entitled “Chapter Twenty-Two: Silent Night, Deadly Night.” This episode was much anticipated and left many fans shocked with the reveal of the Black Hood, Riverdale’s serial killer.

The episode revolves around the discovery of the Black Hood. Betty Cooper (Lili Reinhart) and Archie Andrews (KJ Apa) are on the search when they finally discover the serial killer. While all of this was happening, Jughead Jones (Cole Sprouse) drove the of the Serpent drug dealer, Penny Peabody.

Throughout the season, there were great moments, and there were not so great moments. The suspense left many watchers on the edge of their seats. Some episodes had awkward scenes or overdone relationships. The marriages in the show are extremely unrealistic, in which there is not a single healthy marriage.

The characters can be unrealistic in the sense that they are supposed to be sophomores in high school, and they are seeking out murderers. Many may think that the main four are very similar to the characters in the “Scooby Doo” franchise, but the show derives from the classic comic book series, “The Archie Comics.”

All the actors did an amazing job, but there were some who stood out more than others. Sprouse shows his skills while playing the disturbed writer. This character stands in stark contrast to his previous role as Cody Martin on “Suite Life of Zack and Cody.” KJ Apa also shows talent with his American accent. The Australian actor’s true voice goes undetected in most scenes.

Season 2 is much more intense than season 1. The storyline revolves around a more serious crime of a serial killer and not just one murder. Episodes have become darker and more thrilling. There is more focus on the Southside Serpents now that Jughead is apart of the gang. Relationships between Archie and Veronica and Betty and Jughead have had even more screen time this year.

However, new characters that have come to the show have not receive the same affection by the Riverdale fanbase as the original cast. Some of these people include Nick St. Claire (Graham Phillips), the Black Hood, also known as Joseph Svenson or Conway (Cameron McDonald), Toni Topaz (Vanessa Morgan) and Hiram Lodge (Mark Consuelos).

There is also the much anticipated character of Chic Cooper (Hart Denton), the long lost brother of Betty Cooper who is set to be in the first episode of the second half of the season.

The show plans to return with the midseason premiere on Wednesday, Jan. 17. The trailer for the episode has been released, and it leaves fans wanting more. This sneak peek shows that the Southside High students will begin attending Riverdale High. The mixture of the schools are likely to cause chaos and drama.

Mackenzie is a senior at Marjory Stoneman Douglas High School and is an Editor-in-Chief. She plans on going to school for English education. She enjoys playing Sims, reading and riding her bike.