On Sunday, April 14, the Marjory Stoneman Douglas High School spoken word team won in the finale of the “Louder Than A Bomb” competition placing first in the state.

“Louder Than A Bomb” takes place all throughout Florida, from Fort Lauderdale all the way up to Gainsville where one from any school can compete as a team or as an individual poet. The winners are decided by the school’s total score which includes their group piece and all the scores given to their individual poets.

Junior Marisol Garrido won third place in the state for the independent poet’s category and the MSD team won first place overall. The people involved in the team piece were junior Anna Bayuk, senior Dylan Bowerman, freshman Yasmin Gay and Garrido who performed a piece about the AIDS epidemic in the 1980s.

“Our intention regarding that piece was kind of to inform the audience of the history there because it’s so often overlooked, like half of the people going into it had only heard of AIDS in the extent of ‘don’t have sex or you’ll get AIDS and die’,” Bayuk said.

The spoken word team won a trip to Chicago this June to go to a week-long writing workshop where they will meet people who do slam poetry and learn more about it. 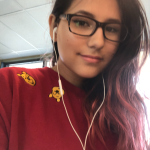